There is something more than a little unsettling when a government and industry collaborate. Government is all about political power … and the use of force against those who refuse to cooperate. Industry is all about economic activity and, in free societies; it is closer to the individual. Business, after all, provides most of us our jobs, our income, our career paths. When business and government combine they form effectively fascist societies; combining the economic power or industry with the coercive power of the state.

Obama invited the heads of the major US banks to a meeting in the White House recently, and they came. They had no choice; the government is either a majority or minority stakeholders in their companies. 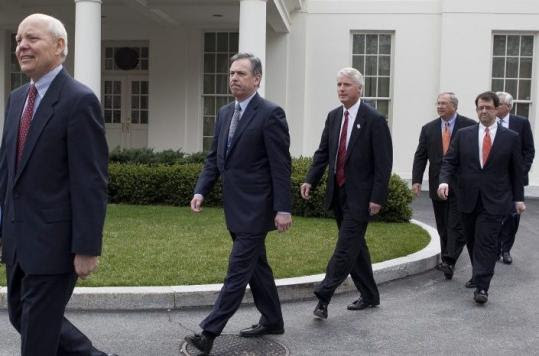 The concerns about this seizure of power by government are not theoretical. Historians, especially historians of the Left are constantly reminding us that Hitler had the support of German “industrialists.” Here is the testimony of those industrialists and their co option by the Nazi regime.

Have we had our Reichstag fire yet?

UPDATE: Thanks for the link Glenn.
Glenn Reynolds referred to my post as "Perhaps a bit overwrought..." but his very next post is about

GM’s CEO Resigns At Obama’s Behest. What do you call it when the private companies are nominally independent, but do whatever the government wants? Not capitalism...

Let's see, what would you call a society in which the President of a country fires the Chairman of a Company? Maybe we should re-read Jonah Goldberg's latest book.
Posted by Moneyrunner at 9:02 AM

You might want to consider the possibility that we've got a de novo situation on our hands. On the other hand, Gary Dean Best's Pride, Prejudice, and Politics is spooky in its parallels. The players are mixed around with the UK taking some of Roosevelt's worse ideas but everybody seems to be channeling the old guy.

Only last night I watched this video http://www.foxnews.com/video/index.html?playerId=videolandingpage&streamingFormat=FLASH&referralObject=3998161&referralPlaylistId=undefined of Daniel Hannan being interviewed on Fox news. Basically he's saying that doing nothing is better option than doing something. That the recession creates the feeling that "something has to be done" (taking over the industry, for example), while the best option is to "do nothing" and spend less, until the recession is over.

If you haven't seen that video, I highly recommend it.

Obama has suddenly snatched the reins from GM's president, in something like the hijacking of an airliner, in which the hijacker orders the captain out of the left seat and hops in, smiling and brimming with confidence. Barack O. has out-socialized the socialists. Not even the spendy Europeans are swallowing Obama's "Soviet States of America" style massive "social" spending.

If investors try to send Obama a shot across his bow by dumping the stock market back into a death dive, they still don't get it with Obama. Our new President WANTS the markets to collapse, he WANTS the western world on its knees, begging him to rescue them-- the socialist, or, more precisely, the soviet way.

Although few voters knew, Obama's father's "dreams" were of the Soviet Union, not the United States, leading and shaping the world. Had voters read Obama's "Dreams from My Father" they would have known that Obama was a man with a score to settle with America-- an odd "qualification" for the job.

Yep, making the market go down to punish Obama is like throwing Brer Rabbit in the brier patch. Hang on, Americans, we are in for a very wild ride, as wild as your worst dreams, not his. Like the suicidal/homicidal Egyptian co-pilot who dove the airliner and its helpless passengers straight down into the Atlantic a few years ago shouting "Allah wills it," Obama has the wheel now, and will take us where he will.

To be fair, Michelle Obama did warn us that, once elected President, Obama would "not LET you be the way you were." The media simply ignored the clear, profuse and imminent danger inherent in Michelle's assessment of what Obama had in store for us. There were no followup questions by reporters of Michelle or Obama along the lines of "Say what? Not LET us be the way we were? What does he think he's running for-- Drill Sargent in Chief?"