Hillary Clinton and her media allies have been working overtime to put out numerous fires that continue to pop up and spread during the final weeks of her campaign for president. Recently, the flames have gotten more difficult to smother as reports of Clinton’s frail health have bled into the mainstream media, despite the unanimous and unilateral decision by the MSM to treat anyone who even raises a question as akin to a Holocaust denier. (On Sunday night, for example, Huffington Post fired contributor David Seaman and deleted his columns simply for linking to a Hillary health video that’s been viewed four million times.)...

This bombshell, compounded with Clinton’s use of a private server as secretary of state, is fueling allegations that she was involved in a pay-to-play operation. But the story has been suppressed by Google in its searches—just as it has done in the past with stories that paint Clinton in a negative light.

When searches related to this story were entered into the Google web browser last week, results for “Clinton AP story” were limited to stories from leftwing publications discrediting the story—including this report from Vox: “The AP’s big expose on Hillary meeting with Clinton Foundation donors is a mess.”...

To understand why The New York Times, Google, CNN and PBS would censor negative information about Clinton, particularly, stories revolving around the Clinton Foundation scandal, all you have to do is follow the money. All of these companies have donated—in some cases up seven figures—to the Clinton Foundation. Carlos Slim, Chairman & CEO of Telmex, the largest New York Times shareholder, donated between $1 and $5 million. Google donated between $500K and $1 million.

The parent company of CNN, Time Warner Inc., gave between $50k to $100k to the foundation. (Woodruff, who serves as co-host and managing editor of PBS “NewsHour”, gave $250 to the foundation’s Clinton Haiti Relief Fund in 2010.) It’s no wonder these media entities are reluctant to report harmful stories on Clinton, specifically ones surrounding the Clinton Foundation, since in doing so they could be implicating themselves in this evolving scandal.

The Failure of African Socialism


BINGA, ZIMBABWE - The hungry children and the families dying of AIDS here are gut-wrenching, but somehow what I find even more depressing is this: Many, many ordinary black Zimbabweans wish that they could get back the white racist government that oppressed them in the 1970's.

"If we had the chance to go back to white rule, we'd do it," said Solomon Dube, a peasant whose child was crying with hunger when I arrived in his village. "Life was easier then, and at least you could get food and a job."

Mr. Dube acknowledged that the white regime of Ian Smith was awful. But now he worries that his 3-year-old son will die of starvation, and he would rather put up with any indignity than witness that.

An elderly peasant in another village, Makupila Muzamba, said that hunger today is worse than ever before in his seven decades or so, and said: "I want the white man's government to come back. Even if whites were oppressing us, we could get jobs and things were cheap compared to today."

His wife, Mugombo Mudenda, remembered that as a younger woman she used to eat meat, drink tea, use sugar and buy soap. But now she cannot even afford corn gruel. "I miss the days of white rule," she said.

Nearly every peasant I've spoken to in Zimbabwe echoed those thoughts, although it's also clear that some still hail President Robert Mugabe as a liberator. This is a difficult place to gauge the mood in, because foreign reporters are barred from Zimbabwe and promised a prison sentence of up to two years if caught. I sneaked in at Victoria Falls and traveled around the country pretending to be a tourist.

The human consequences of the economic collapse are heartbreaking. I visited a hospital and a clinic that lacked both medicines and doctors. Children die routinely for want of malaria medication that costs just a few dollars.

In about 600 BC the Kingdom of Judah was busy abandoning it's relationship with God. They adopted the religion of the Canaanites and tried to find safety in alliances with other tribes.  Jeremiah was told by God to warn Judah that they were going to lose the protection of God if they did not return to their roots in faith.

America - this country - has been blessed beyond any other and during it's ascent it was a nation in which most people believed in God.  And those who were not good Christians pretended to be.  Today faith is ridiculed and Christians are reviled.   Now the people are abandoning the Lord God and worship other Gods.

God will turn away and give us to our enemies if we do not listen to the prophets.

2 “Go and proclaim in the hearing of Jerusalem:

“This is what the Lord says:  ‘I remember the devotion of your youth, how as a bride you loved me and followed me through the wilderness, through a land not sown.'

3 Israel was holy to the Lord, the first fruits of his harvest; all who devoured her were held guilty, and disaster overtook them,’”declares the Lord.

4 Hear the word of the Lord, you descendants of Jacob, all you clans of Israel.

5 This is what the Lord says:  “What fault did your ancestors find in me, that they strayed so far from me? They followed worthless idols and became worthless themselves."

6 They did not ask, ‘Where is the Lord, who brought us up out of Egypt and led us through the barren wilderness, through a land of deserts and ravines, a land of drought and utter darkness, a land where no one travels and no one lives?’

7 I brought you into a fertile land to eat its fruit and rich produce. But you came and defiled my land and made my inheritance detestable.

8 The priests did not ask, "Where is the Lord?’ Those who deal with the law did not know me; the leaders rebelled against me.  The prophets prophesied by Baal, following worthless idols.

10 Cross over to the coasts of Cyprus and look, send to Kedar[a] and observe closely; see if there has ever been anything like this:

11 Has a nation ever changed its gods? (Yet they are not gods at all.) But my people have exchanged their glorious God for worthless idols.

12 Be appalled at this, you heavens, and shudder with great horror,” declares the Lord.

13 “My people have committed two sins: They have forsaken me, the spring of living water, and have dug their own cisterns, broken cisterns that cannot hold water.

America was settled by a religious people, a Christian people, who came to a wilderness to be free to worship Him.  That bowed down and thanked God for his bounty.

What fault did the the latter-day Americans find in the God that blessed them?  Why did they depart from the path and bow down to Gods of their own creation?

The Kingdom of Judah was carried away in Babylonian captivity.  Where will America end up?

Covering up the $1.3 billion payoff to Iran

This window into the shenanigans the administration is using to implement its deal isn’t just about whether the latest move is legal. No one has yet said it broke the law.

One of the principles of newspapering, though, is that the scandal is often not about what’s illegal but what’s legal. How can the administration tap the taxpayers for $1.3 billion without the say-so of Congress?

This is one of the most basic prohibitions in the Constitution. “No Money shall be drawn from the Treasury, but in Consequence of Appropriations made by Law,” is the way the parchment puts it.

The government maintains the judgment fund is legit. It calls it an “indefinite, permanent appropriation.” The idea is that Congress didn’t want to be bothered with having to pass a law for every nickel-and-dime settlement.

Could it have intended to authorize a blank check to send $1.3 billion to a regime that calls us the Great Satan and threatens to wipe Israel off the map? What Congress in its right mind would do such a thing?

‘Polls Are Closed,’ They Lied How the media nearly stole the 2000 election for Al Gore


It's who they are and what they do.


To hear the mainstream news media retell the story of the contentious 2000 presidential election, one would think that it all boils down to Bush v. Gore. The Supreme Court decision created huge controversy and poisons public life to this day. But this focus on the decision serves to obscure an act of great duplicity on the part of the media that dwarfs the impact of that case: namely, that if it hadn’t been for actions they took on television on Election Night, November 7, 2000, there never would have been a Bush v. Gore or a Florida recount in the first place.

It is a story of voter suppression. As it turns out, most of what we think was important about that election—hanging chads, butterfly ballots, 36 days of legal jousting—is unimportant. And by 8 p.m. Eastern Time on Election Night, a cover-up had already begun.


The network news anchors told their viewers that the Florida polls had closed, but Florida is in two time zones and the time zone that's heavily Republican (the "Redneck Riviera")  was still open.  Here is what poll workers said:

We had the usual rush in the early morning, at noon and right after work. There was a significant drop in voters after 6:00. The last 40 minutes was almost empty. The poll workers were wondering if there had been a national disaster they didn’t know about. It was my observation that this decline in voters between 6:00 and 7:00 was very different when compared to previous elections. The last 30 minutes was particularly empty. There is usually a line after the poll closes. In this election there was no one.

The second poll worker corroborated the testimony of the first, stating, “The expected rush at the end of the day didn’t happen. We were all very surprised. It was a normal day until 6:00 pm. Between 6:00-7:00 pm voter turnout was very different from past elections. There was practically no one the last 40 minutes.” Since the final hour of voting in any election is typically characterized by an after-work rush, one can only imagine how many people would have voted in that last, deserted 40 minutes, but for the misinformation dispensed by the network and cable news anchors.

Liberals are very tolerant, until .... 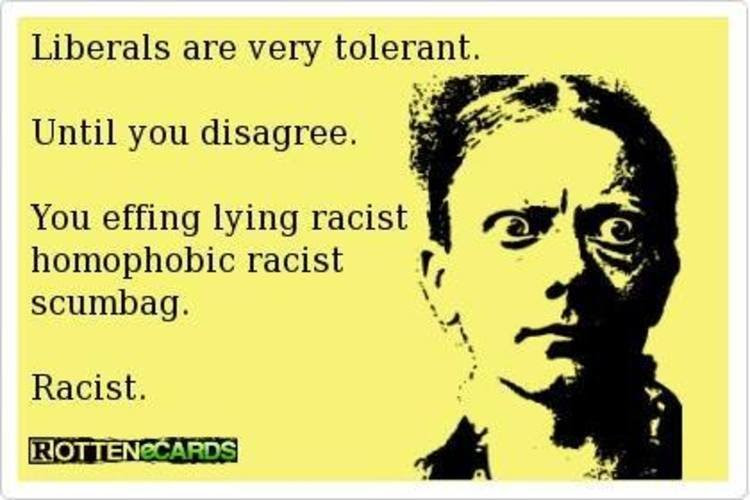