56 Newspapers to Sing As One About Copenhagen

Despite mounting evidence that key climate researchers were less than honest, and other indications that the science is not settled, tomorrow 56 newspapers will run a common front page editorial saying we have 'Fourteen days to seal history's judgment on this generation':

Tomorrow 56 newspapers in 45 countries take the unprecedented step of speaking with one voice through a common editorial. We do so because humanity faces a profound emergency....

The graphic below, reprinted from The Guardian in Britain, show the newspapers which will be participating. Here's what's really motivating the alarmism, from the editorial:

Social justice demands that the industrialised world digs deep into its pockets and pledges cash to help poorer countries adapt to climate change, and clean technologies to enable them to grow economically without growing their emissions.... And fairness requires that the burden placed on individual developed countries should take into account their ability to bear it; for instance newer EU members, often much poorer than "old Europe", must not suffer more than their richer partners.

Social justice and fairness? I thought this was supposed to be about science.

Thankfully, we still have the internet, and bloggers who still care about uncovering the truth as to climate change. We certainly can't rely on the mainstream newspapers anymore, if we ever could. 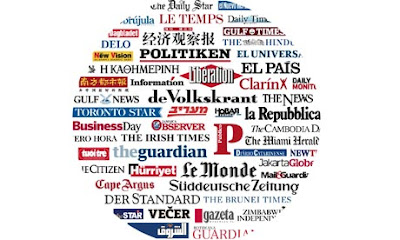 YOUR FREE, FIERCELY INDEPENDENT PRESS AT WORK: 56 Newspapers to Sing As One About Copenhagen. Fiercely independent.

Posted by Moneyrunner at 7:56 AM