This is how the Associated Press Lies for Biden 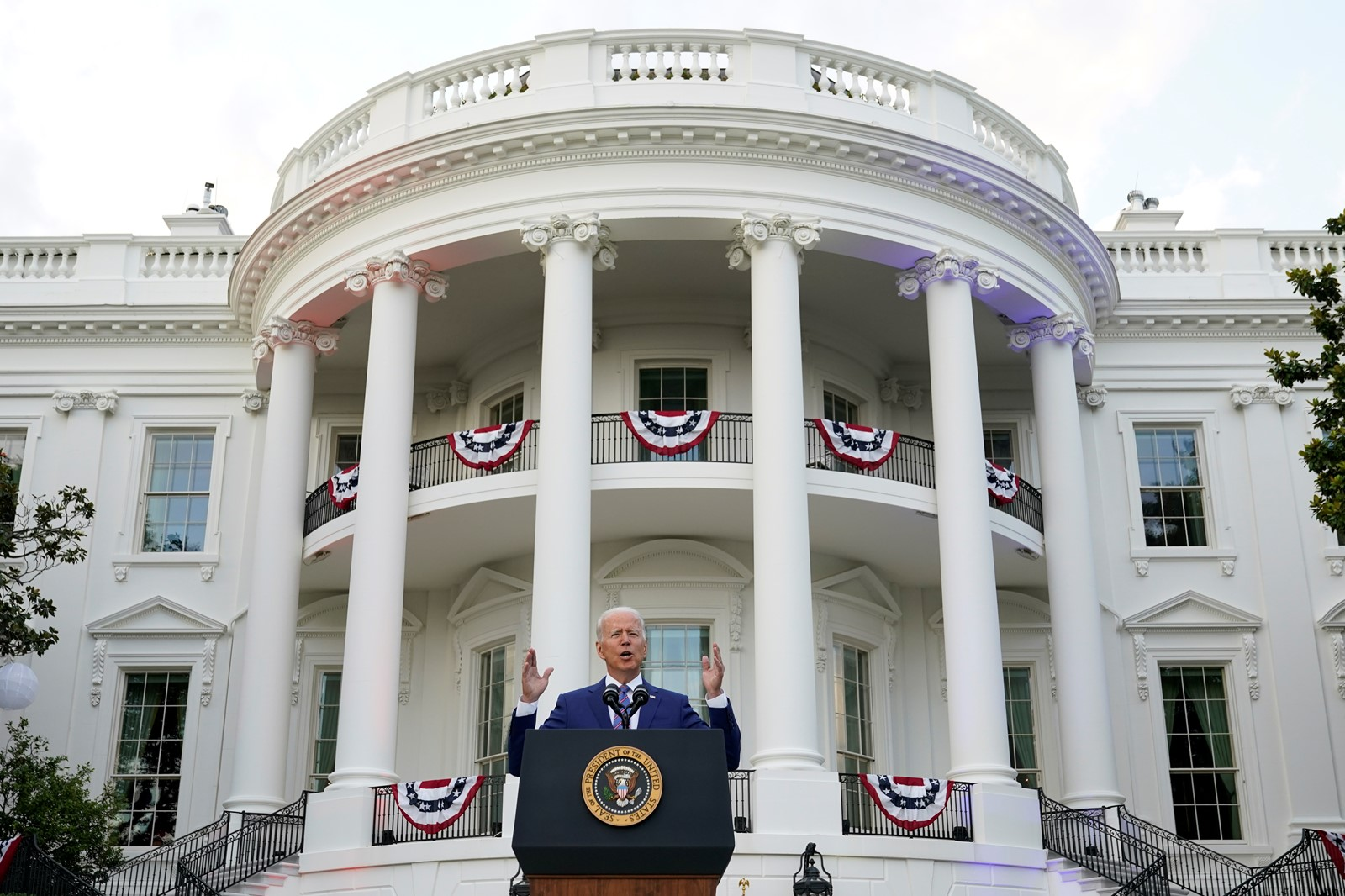 A year later, Biden suffering a slide; Last July 4 served as a crossroads in president’s approval

“President Joe Biden gathered hundreds of people outside the White House for an event that would have been unthinkable for many Americans the previous year.”

Really?  Many Americans thought celebrating the 4th was unthinkable?

Biden declares victory over the virus thanks to a vaccine developed under Trump.

Although the pandemic wasn’t over yet, Biden said, “we’re closer than ever to declaring our independence from a deadly virus.”

Across the country, indoor masking requirements were falling as the number of infections and deaths plummeted.

Within weeks, even some of the president’s allies privately admitted that the speech had been premature. Soon the administration would learn that the delta variant could be transmitted by people who had already been vaccinated.

Remember the “mask on/double mask/triple mask/mask off” “School open/School close” “get vaxed, get a booster or you are a criminal who wants to kill grandma?”  The Biden Team lied to us and told us that the vaccine would prevent us from getting sick and would prevent us from spreading the virus.  They knew it was a lie all the time.  They even hid the side effects that are now killing healthy adults.

Masks went back on, then came polarizing vaccination mandates. The even-more-contagious omicron variant would arrive months later, infecting millions and causing chaos during the holiday season.

“We were hoping to be free of the virus, and the virus had a lot more in store for us,” said Joshua Sharfstein, vice dean of the Johns Hopkins Bloomberg School of Public Health. The number of people in the United States who died from COVID-19 nearly doubled, from 605,000 to more than 1 million, over the past year.

And then, for reasons no one could have foreseen, things went wrong.  The AP wants you to know it was not Biden’s fault.

A series of miscalculations and unforeseen challenges have Biden struggling for footing as he faces a potentially damaging verdict from voters in the upcoming midterm elections.

And of course, “Republicans pounce”

Even problems that weren’t Biden’s fault have been fuel for Republican efforts to retake control of Congress.

The pandemic’s resurgence was swiftly followed last summer by the debacle of the U.S. withdrawal from Afghanistan, when the Taliban seized control of the country faster than the administration expected as the U.S.-backed regime collapsed. Then, negotiations over Biden’s broader domestic agenda stalled, only to collapse altogether in December.

Note that the responsibility for these decisions is mysteriously missing.

Chris Megerian and Zeke Miller of the Associated Press outright lie to the reader that the rise in gas prices and inflation was due to Russia’s invasion of Ukraine.

The Russian invasion of Ukraine in late February caused a worldwide spike in gas prices, exacerbating inflation that reached a 40-year high.

Is discontent with Biden and his policies really about the Supreme Court, or does it have everything to do with his dementia, high gas prices, high inflation, crime in the streets, and political polarization aggravated by an administration at war with half the country?

Suddenly a reactive president, Biden has been left trying to reclaim the initiative at every step, often with mixed results. The coronavirus is less of a threat than before and infections are far less likely to lead to death, but Congress is refusing to supply more money to deal with the pandemic.

Is the problem in the country a “pandemic” that is over?  Is the country desperate to have the Federal Reserve print another five trillion dollars or are people saying that the last few trillions Biden spent caused the inflation we’re suffering now?

He signed new gun restrictions into law after massacres in New York and Texas, and he’s leading a reinvestment in European security as the war in Ukraine enters its fifth month. But he has limited tools at his disposal to deal with other challenges, such as rising costs and eroding access to abortion.

People are stocking up on guns because they feel less safe in their homes so threatening to take those guns away is an odd way of calming fears.  And why do the AP writers assume that the President can’t do anything about rising costs?  Finally, the Supreme Court didn’t outlaw abortion, they simply said that abortion is not in the Constitution and what’s not in the Constitution is up to the States and to the people.  The people, not nine unelected men in black robes get to decide the issue of abortion.

The AP lays the blame at your feet.  You’re just a grouch and can’t see the wonderful things that the Biden Administration is doing for the country. If you can’t afford $5 gas, buy a $60,000 Tesla.

It’s hard to believe, but the AP is still beating the drum for the Wuhan flu virus.  I would not put it past the Biden Administration, with the help of the Corporate Media, to declare that the country needs to shut down again and that everyone must vote by mail-in ballot.  A tried-and-true way to steal the next election.  Here is the set-up:

Michael Osterholm, director of the Center for Infectious Disease Research and Policy at the University of Minnesota, was an adviser to Biden’s transition team. But as the Fourth of July approached last year, he was worried and felt that the administration wasn’t heeding his warnings.

Even now, a full year later, Osterholm is reluctant to say what the future holds.

Posted by Moneyrunner at 8:05 AM