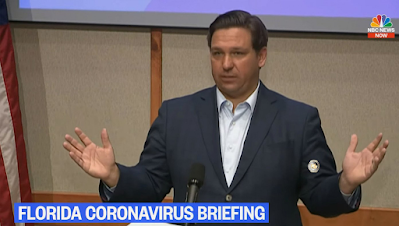 U.S.—Media outlets around the country have condemned Florida Governor Ron DeSantis after it was discovered he vaccinated vulnerable seniors-- a population that leans conservative.

"This is a clear case of corruption," said MSNBC's Joy Reid. "Everyone knows that most old people are racists who probably vote for Republicans. Not only were the governor's actions corrupt-- they probably saved the lives of several racists. This is unacceptable."

Several other godless nihilist commies agreed, saying the governor's move to favor the elderly for vaccination was "a waste of resources."

According to sources, DeSantis even refused to follow Governor Andrew Cuomo's lead and shut all the seniors in nursing homes as the virus spread through them.

New York Governor Andrew Cuomo sent a copy of his book to DeSantis to help him do better next time.

The latest data suggests the Republican governor's cynical move to save human lives has paid off. According to the latest polling, DeSantis now enjoys a 103% favorability rating among vaccinated Republican seniors.

Posted by Moneyrunner at 4:21 PM