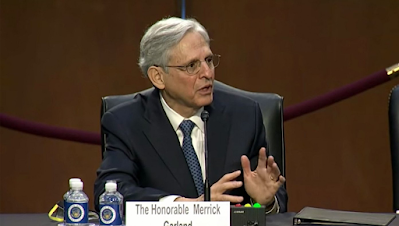 WASHINGTON D.C.—Merrick Garland, who failed in his Supreme Court hearings in 2016 because of that time he got grape jelly all over the Constitution, is now participating in hearings to be the Biden Administration’s Attorney General. During the hearings, Senator John Kennedy, R-LA, asked Garland if he agreed with this statement: “Two plus two equals four.”

Garland was quiet for a moment before finally saying, “This is a very difficult societal question that you're asking me here; I know what underlies it.”

"Well, I, uh, don’t know if in this scenario I will be, uh, the one tasked to count the, uh, apples,” Garland answered, “so I don’t think it’s proper to, uh, give an answer at this time.”

The answer of what two plus two equals has become a controversial issue ever since the progressive movement embraced flexible values of two .... [getting the idea from 1984.]

Posted by Moneyrunner at 8:57 AM