The report of the Office of Inspector General, National Archives and Record Adminstration is out, and it devastating for Sandy Berger.

I have read the report. There are a lot of redactions, but the story is fairly clear. Here it is:

The National Archive and record Administration has issue a report on the unauthorized removal of classified documents from the National archives by Samuel “Sandy” Berger. His access to the archives and the unauthorized removal occurred in connection with a request by the Joint Intelligence Committee (the Graham-Goss Commission) for his testimony. In addition he was to review documents in response to a request from the National Commission on Terrorist Attacks Upon the United States: the “9/11 commission.”

“On April 12, 2002 President Clinton signed a letter designating Mr. Berger and [REDACTED] as agents on his behalf to review relevant NSC (National Security Council) documents regarding Osama Bin Laden/ Al Qaeda, Sudan and Presidential correspondence from or to Omar Bashir, contained in the Clinton Presidential records.”

Over the subsequent year-and-a-half Sandy Berger reviewed the records held by the “Archives” four times. The first was on May 30, 2002, and three other times in July18th, September 2nd and October 2nd 2003.

Security protocol allowed Sandy Berger to read the documents and make notes. However, he was not allowed to remove documents or take the notes with him. The notes were not to be taken out of the archives, but were to be “retained by NARA staff and forwarded to the NSC for a classification review and appropriate marking.” In other words, Sandy Berger was not to take any documents out of the archives, including his notes. His notes were to be classified before being returned to him.

Berger reviewed the documents in the office of a [REDACTED] official of the Archives. The protocol is for anyone reading classified document in the archives to have someone monitoring this person. In the case of Sandy Berger, because of his previous high position of trust, he was provided with space in a comfortable office.

By his time, Mr. Berger had established a consulting business and was the originator or recipient of numerous phone calls during his time reading documents. A pattern was established that during such phone calls, the other person in the office would step outside to allow Mr. Berger privacy. In addition, Mr. Berger availed himself of the use of the rest room either ever half-hour or hourly. The report notes that both the private phone calls and the bathroom breaks allowed Mr. Berger quite a bit of time to secrete documents on his person.

Those who rely on either news reports on the omniscience of the federal government will be disappointed to find that even after three years of investigation, much remains unexplained.

It is glaringly obvious from the report that the National Archives are a large, but largely and for the most part unorganized - data dump. The fact is that the records kept in the archives are no more organized than the records kept by the average person at home. Files hold documents that do not correspond the tabs on the file folders. File folder tabs are found in the bottom of file boxes.

I would say that if the files in my office were managed as sloppily as the files at the archives, I would be very worried. The problem appears to be data overload and no negative repercussion for failure; unfortunately, almost a definition of a government bureaucracy.

The suspicion began on September 2nd that Sandy was a burglar. “On September 2, 2003, there was a suspicion Mr. Berger may have removed classified material from the Archives.” An employee thought he had seen a “white” something in Mr. Berger’s socks.

The law was not called at this time. We can only assume that Mr. Berger benefited from the “Important Person” syndrome. Who was going to call the cops on President Clinton’s former National Security Advisor? Some in the Archives were probably Clinton fans. Others were afraid that blowing the whistle could cost them their jobs. You don’t accuse the rich and powerful of crimes unless you have them dead to rights otherwise their friends will ride you out of town.

On October 2rd, employees of the archives set a trap for Burger by numbering several of the documents. They determined that Berger removed documents from the archive. Again, no law enforcement individuals were called; the incident was investigated internally and included a call to Mr. Berger. Berger removed four documents, all versions of the MAAR (Millennium After Action Report).

Berger took a break near the end of the day, walked outside, hid the documents and a sheaf of notes he had taken in a construction site underneath a trailer. Following this he retuned to the archives, not having any notable bulges, and continued his document review. At the end of the day he left the archives, retrieved the documents from the construction site and took them to his office.

An employee of the archives called Burger on October 4th and told him that the documents were missing. Berger denied having them. Berger was then told that “I hope you can find them because if not, we have to refer this to the NSC [REDACTED]…” It as a little late for that because on the night of October 2nd Berger had cut three of the four documents into small pieces and put them in the trash.

On October 5th 2003, Berger agreed to return documents that he had in his possession. Unfortunately for Berger, he also retuned documents that the Archives did not realize were missing. So we do not know what documents he took and when he took them. Some of the documents he was given to review were copies and some were originals. From the release, it is not clear what the definition of “copy” and original” is..

According to Sandy Berger’s testimony, “There were not any handwritten notes on the documents [he] removed from the Archives. [he] did not believe there as unique information in the three documents he destroyed. [he] never made any copies of these documents.”

The question remains, what was on the documents that were cut up and thrown away. I am not ready to take Sandy Berger’s word for their contents.

UPDATE: I am honored and pleased that Doug Ross has commented on this post. Click HERE for his take on how this story would be treated if the person stealing and destroying documents were Dr. Rice. 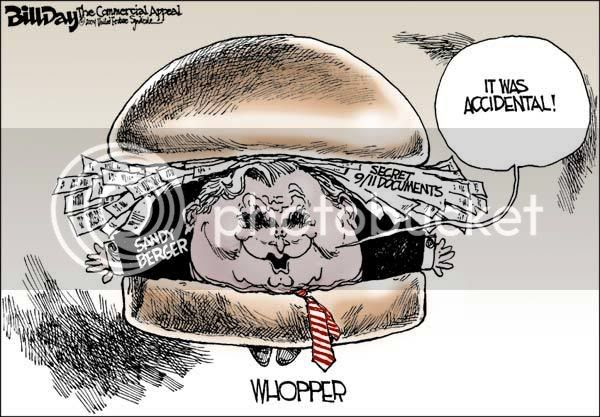 and from Dr. Sanity, a Sandy Burger song.
Posted by Moneyrunner at 9:50 PM

Outrageous. I did a little thought experiment: what if Condi Rice had been caught in the same situation in 2003?