On Titties and Terrorists

I know this post will offend some people, but the author makes some good points. From the House of Eratosthenes.

"It" is a pair of things, actually. Here at The Blog That Nobody Reads, we like to critique the prevailing viewpoint, that all-important Conventional Wisdom. We blossom forward with unsolicited opinions, when that Conventional Wisdom is most opprobrius to old-fashioned common sense. And the pair of things that "It" is, would be the two subjects that repeatedly inspire comments, design to influence the unspoken orthodoxy, that are...well, let's just call them what they are. Bull squeeze. Moose feces. Wombat-rabites bollywonkers crazy codswallop.

Where these two subjects rise up, it seems the more impressive the office held by the person speaking out about them, the more nonsensical is the crap coming out of that person's mouth. People say stuff with regard to these subjects that, if life & limb were depending on the verity of the stuff they're saying, they'd stop in mid-sentence and then start mentally spanking themselves for the foolishness of the comments they're passing through their voice boxes, or placing in ink over their signatures.

The two subjects are terrorist attacks, and young ladies who aren't wearing very much clothing.

I've commented before on my complete lack of success trying to figure out what these two subjects have to do with each other. I still don't understand what the common ground is. But there must be some.

We have people in positions of power, prestige, and public trust, who say people in our executive branch should be blamed for -- hurricanes! Yes! And yet, when evil men conspire for years at a time, taking lessons in how to fly a plane but not to land it, go to one last stripper show on September 10, say their prayers, bathe in their martyr's cologne, do their holy fasting, rent cars, catch planes, slash the flight attendants' throats with box-cutters, hijack the plane, say some more prayers, and then with a hearty "Allah Ackbar!" steer the aircraft into buildings...this whole event is something that happened. You can't describe the event while mentioning the word "Islam" or "Muslim," not unless you're talking about hate crimes unfairly perpetuated in the wake of the event...or pontificating with dread about how some of our airport security people may be thinking about some racial profiling. Oh, no, never speak about those who did something that was done. You only speak of our (Republican) President, and the cause-and-effect influence he may have had on the freakin' weather. 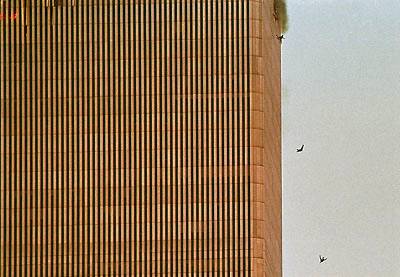 All of these cognitions, sentiments and proclamations are fecal in nature. They are worth nothing, save for fertilizing qualities. No one in their right mind, would actually consume them, since they're simply a waste product from something else. You wouldn't bet your own life, limb, treasure, or esteem on the idea that the September 11 attacks simply "happened," or that when a cheerleading squad including girls as young as 6 or 7 years old is required to cover up their bellies with some fabric, the prohibition against bare midriffs has nothing to do with proper dress for 6-year-old girls, and is intended to prevent "eating disorders." These ideas are all absurd. They are articulated, by people who hold positions of high honor and trust, with the expectation that the comments will be remembered among a narrow, fanatical audience that happens to like them, and soon be forgotten by everyone else. To the public at large, you can expose what's ludicrous about these statements, simply by repeating them two or three times. They are not constructed for the purpose of being inspected critically. They are constructed with the explicit expectation that the subject must be changed, irreversibly, entirely, before the last syllable of the statement has echoed off the farthest wall.

Click on the link to read the whole thing
Posted by Moneyrunner at 4:32 PM