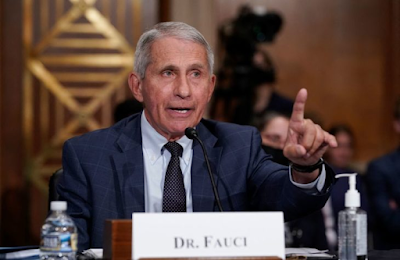 Anyone wishing to appreciate the nature of our two-tier society needs only to contrast the fate of St Anthony Fauci with that, say, of General Mike Flynn or any of the dozens of political prisoners who are, many of them, being held without charge in appalling conditions in a Washington, D.C. prison even as I write.

Fauci has been a carbuncle on the countenance of American life at least since he help spread the myth of heterosexual transmission of AIDS in the 1980s. The new Chinese flu was custom made for his brand of panic-mongering and totalitarian posturing.

... He lied, under oath, about his role in his testimony before Congress, most pointedly in his heated exchanges with Senator Rand Paul this last summer....

You understand this, right? If you are part of the nomenklatura, you are endowed with a sort of metaphysical get-out-of-jail-free card, an immunity inscribed like a vaccine confirmation on your soul. You can lie to Congress, lie to the FBI, lie to the public with impunity. More than that, if you are part of the nomenklatura’s shock troops — a member, for example, of antifa or Black Lives Matter — then you can burn down police stations and destroy private property with impunity — nay, you can be hailed as a hero, a campaigner for “social justice.”

Posted by Moneyrunner at 9:06 PM