Before you get too excited, who wants to bet the Younkin will be more than a seat warmer?

Every Republican I met over the weekend was excited about the last election.  Republicans got the Governor, Lt. Governor, and Attorney General's offices and also captured the House of Delegates.

So just how excited should we be?  OK, the "Woke" Democrats will not be promoting transgender bathrooms from the Governor's Office for a while.  But does taking office mean anything more than pausing in the rush to go over the cliff?

Here's Mark Stey's opinion, and if he's right we are going to be very disappointed.

The Republican candidate, Mr Youngkin, is a squish of no fixed beliefs who will govern as Mitt did in Massachusetts or Pataki did in New York. But he has been handed a winning issue that he would probably not have chosen save for public outrage - the state of Virginia schools in an age of "critical race theory" and trans-mania. It's bigger even than an education issue: The left is so boundlessly ambitious that it is abolishing biological sex, and if it gets away with it will leave an awful mountain of human wreckage in its wake, bigger even than its other innovations.

Every Virginian should vote on Tuesday - because Youngkin's campaign is a classic example of Milton Friedman's dictum: in politics you don't wait for the right people to do the right thing, you create the conditions whereby the wrong people are forced to do the right thing. That is what parents at school-board meetings have been doing, and they deserve to be rewarded for it. 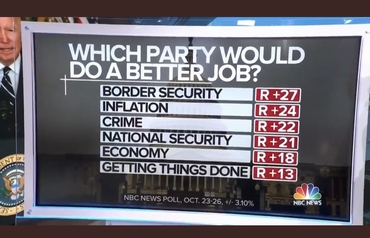 Republicans are good at keeping the seat warm. A bigtime GOP consultant was on TV, crowing that Republicans wanted the Dems to pass Obamacare because it's so unpopular it will guarantee a GOP sweep in November.

OK, then what? You'll roll it back – like you've rolled back all those other unsustainable entitlements premised on cobwebbed actuarial tables from 80 years ago? Like you've undone the federal Department of Education and of Energy and all the other nickel'n'dime novelties of even a universally reviled one-term loser like Jimmy Carter? Andrew McCarthy concluded a shrewd analysis of the political realities thus:

'Health care is a loser for the Left only if the Right has the steel to undo it. The Left is banking on an absence of steel. Why is that a bad bet?'

Indeed. Look at it from the Dems' point of view. You pass Obamacare. You lose the 2010 election, which gives the GOP co-ownership of an awkward couple of years. And you come back in 2012 to find your health care apparatus is still in place, a fetid behemoth of toxic pustules oozing all over the basement, and, simply through the natural processes of government, already bigger and more expensive and more bureaucratic than it was when you passed it two years earlier. That's a huge prize, and well worth a midterm timeout.

Labels: politiziation of everything, Power and Office, Steyn, Younkin