Thanks to Protein Wisdom, we get absolute confirmation that the "art" world is controlled by madmen. Not figuratively, but actually ... madmen. They are impossible to parody because reality is too far off the charts.

An artist's sculpture has been rejected by the Royal Academy of Arts which has instead opted to display the wooden support it was put on.
David Hensel, 64, from East Grinstead, West Sussex, was told the laughing head would be part of the summer exhibition.

But at a preview he found that just a piece of wood intended to support the head was on display on the plinth.

The Academy said the judging panel assumed the two pieces were separate and decided the support was better.

Mr Hensel assumed staff had accidentally left the sculpture in the basement where it was being stored.

In a statement, the Academy said Mr Hensel's work, One Day Closer To Paradise, was submitted as two separate pieces.

"Given their separate submission, the two parts were judged independently.

"It is accepted that works may not be displayed in the way that the artist might have intended."

It said the head had been safely stored ready to be collected by the artist.

The co-ordinators of the exhibition in Piccadilly, central London, have been called in to make a final decision over whether the head should be returned to its rightful place. 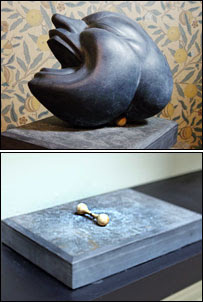 
And what they put on display at the Royal Academy of Arts
Posted by Moneyrunner at 8:51 AM

It's shameful. The selection commitee look tired and not of this world.

As for the Vic Reeves entries, well? I give up.