The assumption by everyone except committed ObamaBots is that ObamaCare will depress new hires as employers try to stay below the 50 employee limit that triggers their participation in this program. But in a perverse way it could have the opposite effect. It could actually increase hiring … of part time employees. This is not good for either employees or employers, but it could make the unemployment numbers look better as the unemployed become the partially-employed, and the full-timers become part-timers.

What started this train of thought was the picture of a woman with the word “Juicy” emblazoned on her derriere.

It turns out that an upscale women’s fashion store that sells expensive women’s clothing and accessories has told its full time employees that they can’t work more than 21 hours per week and are hiring more people to take up the slack. As a result, they don’t have to provide health insurance to its part-timers.

Juice Couture is known for its expensive denim and its velour track suits. Jeans retail for upwards of $178 and handbags around $230. And yet! Employees at the company’s flagship store on 5th Avenue in NYC allege that the company is systematically trying to bilk employees out of hours and benefits. A petition started by employee Duane and former employee Darrell claims that the company has reduced all but a few employees to part time work. Now, they say, most of the store’s 128 employees are limited to less than 21 hours a week. That’s so they don’t have to offer health insurance to their workers — under the Affordable Health Care Act, employees who work 30 hours or more are eligible to receive health care benefits. Further, in order to qualify for sick days, Juicy says you must work more than 1400 per year, which is impossible on a 21-hour per week schedule.

I suspect that Darrell and Duane undoubtedly voted enthusiastically for Obama, not understanding the collateral damage of Obama’s policies.  In Rush Limbaugh's words they are "low information" voters who get their news from the Comedy Central.  For some reason, this is not what they were told they were going to get on The Daily Show.

Though it won’t go into effect until January 2014, many companies are already slashing their full-time employees’ hours in order to get around the requirements. It’ll also increase the number of “temporary” workers, who work on contracts that must be periodically renewed. And thanks to the crappy economy, it’s easier than ever for companies to find workers that will take a job — any job — regardless of benefits or hours.

I, for one, can’t feel too bad for people who advertise their lubricity on their back-ends, or who vote for Obama.  But it would be the height of irony if one of the big unintended side-effects of ObamaCare is an explosion of part-time workers. 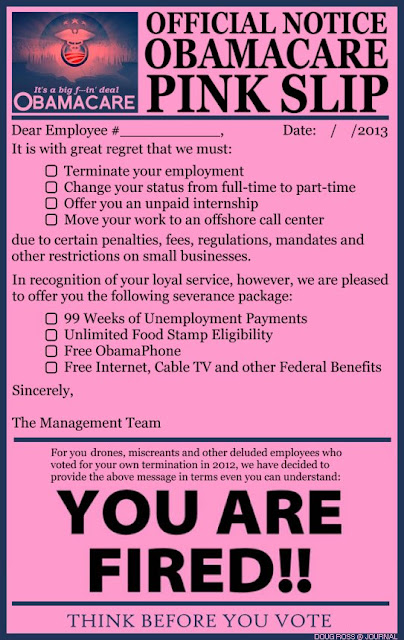 Posted by Moneyrunner at 8:59 PM

Maybe we should start referring to it as the "Part-Time Employment Act of 2009."

Impressive use of "lubricity." Thinking the plural of "employee" is "employee's" ... not so impressive.