For Comey, a creature of the swamp, a deserved dunking 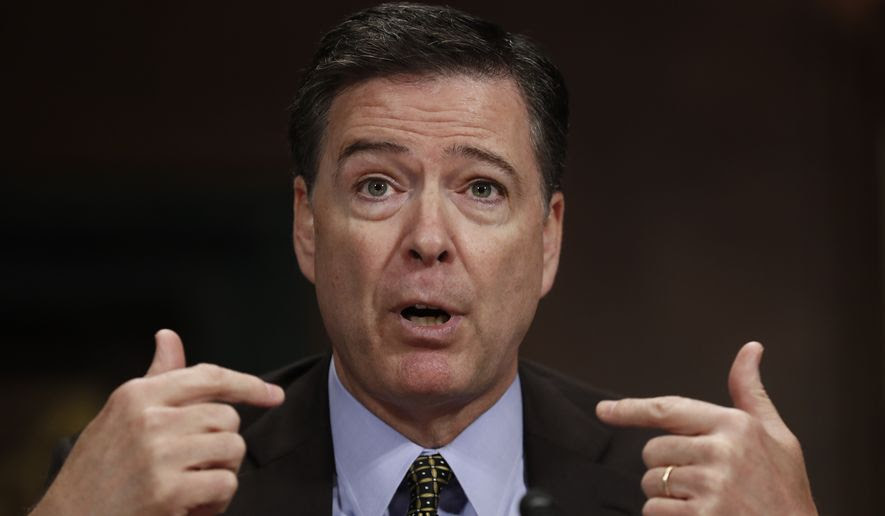 This is what happens if you mess with the swamp. All the swamp creatures begin snapping and writhing and yowling like angry cats in the dark.

For the better part of a year now, the only thing everyone in Washington could agree upon was that now-ex FBI Director Jim Comey was an overreaching, underperforming dolt.
He fancied himself to be attorney general after he had lost all confidence in Loretta Lynch, the actual attorney general.

That was after Ms. Lynch had met privately on a jet with former President Bill Clinton on a tarmac in Phoenix. This was at a time when Mr. Clinton’s wife was running for president while under investigation by the attorney general and the FBI for criminal misuse of classified emails.

After listing a long rap sheet of inexcusable, reckless and conspiratorial handling of state secrets over a purposely concealed home email server — designed specifically to shield Mrs. Clinton from public scrutiny — Mr. Comey jarringly announced that he was recommending that no charges would be forthcoming.

“Although there is evidence of potential violations of the statutes regarding the handling of classified information, our judgment is that no reasonable prosecutor would bring such a case,” he said, concluding his withering damnation of Mrs. Clinton last July.

But, lest any mere mortals think they might get away with doing the same thing Mrs. Clinton had done, Mr. Comey was blunt.
“To be clear, this is not to suggest that in similar circumstances, a person who engaged in this activity would face no consequences,” he warned. “To the contrary, those individuals are often subject to security or administrative sanctions.”

“But” he added, “that is not what we are deciding now.”

In other words, if you are a former first lady who is about to be the next president and whose husband is a former president who just met privately on a plane on a tarmac, then you won’t be charged. But if you are a mere citizen or public employee with no such influence, you’re gambling with your life and your career.

Ahhh, life in the swamp.


Read the whole thing.
Posted by Moneyrunner at 6:43 AM