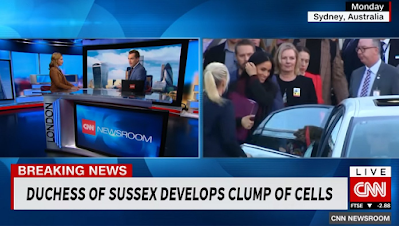 WORLD—Media outlets worldwide congratulated Meghan Markle after it was announced earlier this week that she has a meaningless blob of tissue developing in her womb.

Despite happening many times per day, the world showed it hasn't lost its appreciation for the miracle of new, utterly insignificant groupings of cells being formed inside women's reproductive systems.

“Meghan Markle Glowing After Announcing Potential Human Life Growing Within Her,” read the New York Times headline, while across the pond, the BBC ran “Meghan Markle and Prince Harry Expecting Royal Clump Of Cells” and The Daily Mail pondered “Is That a Fetus Bump We See Already?!”

"I'm so excited to meet the Royal Parasite!" said one Londoner. "I ran down to Tesco straight away to get as many magazines as I could. I just love devouring information about a totally not human, completely purposeless little growth inside another woman, one that she could terminate at any time if she chooses to, as is her right."

The Washington Post devoted some time to discussing the potential future office of the pregnancy, depending on what gender the amorphous parasite would eventually choose for itself.

Posted by Moneyrunner at 3:07 PM