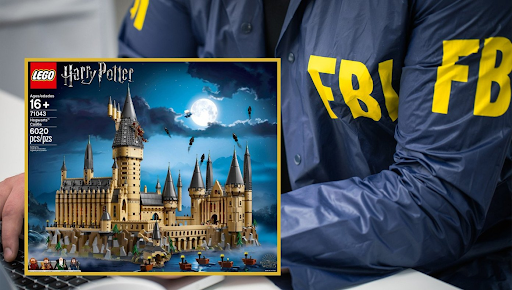 “The suspect had several completed LEGO Harry Potter building sets and was about 80% of the way through building the advanced-level LEGO Harry Potter Castle,” said FBI bureau chief Warren Alvarez. “We feel we caught him just in the nick of time before things turned violent once more.”

Alvarez said a review of Morss’ online social media accounts show him to be a staunch supporter of Lord Voldemort, believing that Albus Dumbledore was fraudulently elected as the leader of Hogwarts. Documents found on his computer show that Morss was planning a violent protest at the school on July 31, Harry Potter’s birthday.

“This is a huge win for law enforcement,” said Alvarez. “The FBI is proud of our work taking dangerous, LEGO-building criminals off the streets. Also, now I don’t have to buy my kid a birthday present, which is awesome.”

In related news, press secretary Jen Psaki said President Biden is renewing his calls for common-sense LEGO control, calling for universal background checks for all LEGO purchases as well as closing the toy show loophole. Psaki said. “We must work vigilantly to keep these dangerous LEGO weapons of war off our streets,” Psaki said.

The Babylon Bee, as usual, nails the idiocy and absurdity of the FBI:

This refers, of course, to the FBI’s and DOJ’s weighty pronouncement that one of the 1/6 arrestees was in possession of–wait for it!–an assembled Lego model of the Capitol. Except it wasn’t actually assembled. It was still in the box. But still! Obviously he was planning dastardly deeds with Legos! It’s amazing the Republic survived. Thank God the FBI is there to protect us!

The FBI has of course been going all out to apprehend the trespassers, gapers, gawkers, and other assorted invaders of the Capitol. They announced with pride some weeks back that they had made 535 arrests. (Gee. Why that number?) (And none for sedition. Why is that, if this was a greater threat to “our democracy”–which it ain’t–than the Army of Northern Virginia?)

But of course the FBI had advanced warning. So why didn’t they stop it?

Why do I say that they had advanced warning? Because I guarantee that every remotely open access organization or ad hoc grouping is penetrated by the FBI. FFS, the FBI has surveilled the “Concerned Women of America,” as if it’s the ISIS Women’s Auxiliary. What next? Red state sewing circles?

A necessary–but not sufficient–condition to prevent being infiltrated by the FBI is a classic cell structure. But take-all-comers groups like Proud Boys or Oath Keepers or Concerned Women of America or a bunch of idiots bragging on Twitter will attract FBI agents and/or assets like a dog attracts fleas.

Oh. And not joining any organization won’t help. The FBI is also deeply concerned about “lone wolf” white extremists. Damned if you do, damned if you don’t. (I’m sure I’m already damned, so this post won’t make any difference.)

So was the FB I complicit in 1/6, or just incompetent in not stopping it?

One cannot rule out the latter. After all, the FBI had advanced warnings about the Pulse nightclub shooter, the Parkland HS shooter, the Fort Hood shooter, and the San Bernardino shooters. Yet they all blazed away unmolested by our vigilant Federal dicks. (I also wonder about the Las Vegas shooter, whom the FBI cannot even figure out ex post. Or supposedly can’t. Maybe their ex post befuddlement is an attempt to conceal ex ante knowledge.)

Although I do not rule out incompetence, I lean towards complicity. Why? This sick-making statement by the current FBI Douchenozzle*, Christopher Wray:

FBI Dir. Wray: ‘Any time there’s an attack, our standard at the FBI is we aim to bat 1.000 … you can be darn tootin’ that we are focused very, very hard on how can we get better sources, better information, better analysis’ pic.twitter.com/2TaVd1oflN

“Darn tootin'”? Are you effing kidding me? “Golly gee willikers Mr. G-man! I’m sure glad we have you to protect us!” “Aw shucks, Jimmy. Just doin’ my job.”

That performance was so transparently phony that Wray would have earned an F in any community college acting class. But our “elite” eats it up.

What is the FBI good at? Setting up mouth breathers to commit crimes, whom it can then arrest and then claim with great fanfare to have protected us from. If you look at most of the high profile terrorism cases the FBI prosecuted post-911, they were low-IQ losers cajoled by FBI informants (operating, of course, at the direction or at least strong suggestion of FBI agents) into committing crimes.

Most recently, the hair-on-fire claims about the allegedly dastardly plot to assassinate Wretched Gretchen Whitmer, governor of Michigan, appear to be less than a real threat than another prêt-à-porter FBI setup, with 12–12!–FBI informants/provocateurs outnumbering the actual dim bulb alleged conspirators.

But this is just one part of the bill of particulars against the FBI. It has also proved shockingly inept (to give it the benefit of the doubt) or complicit in some horrible crimes.

For example, in addition to the terrorism fails mentioned above, it let serial sex offender Larry Nasser operate with impunity for years. Its response to the revelations by the DOJ IG? Not even a “whoops, my bad.” It had copious information on Jeffrey Epstein whom it also allowed to continue his romps for years. (Given Bill Clinton’s and others’ involvement with Epstein, this may have been part of its political police function.) And just recently, FBI agent David Harris was arrested by Louisiana authorities–n.b. state authorities, not the FBI itself–for a sickening trail of child sexual abuse.

Again, in each case: incompetent, or complicit?

In the Nasser case (and others) an FBI agent lied when being questioned. If you or I lie when the FBI questions us–hard Federal time. They lie? No biggie!

Some on the right have called for the “reform” of the FBI. Spare me your naivete. The FBI is unreformable because of its deep internal rot, and the fact that anyone who would be in a position to “reform” it no doubt quakes in terror at the prospect of FBI blackmail or slanderous leaks. (Cf. MLK.)

No. The only peace we could obtain from the FBI is a Carthaginian one. But there’s no Cato or Scipio in sight.

*Four years ago I referred to James Comey as a douchenozzle, for which I apologized profusely, for having insulted douchenozzles. But “Douchenozzle” is clearly a much more descriptive title than “Director.”

Posted by Moneyrunner at 8:30 AM