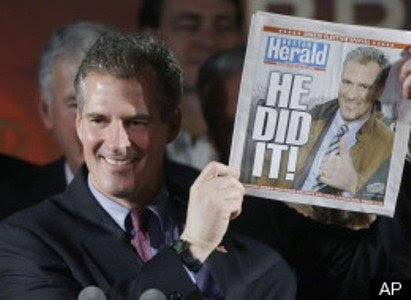 
Moe Lane calls out the Democrats:

This message goes out to every vulnerable Democratic Congressman representing a Republican or even centrist district – and after tonight, who among you is not vulnerable? It is a simple message: we can do this the easy way, or we can do it the hard way. The easy way is, you suddenly decide that you have a burning desire to spend more time with your families. So you don’t run for re-election, you walk off stage technically undefeated, and you go join a lobbying firm. The hard way is, you do run for re-election, and we pry you out of your seats.

We want to do this the hard way. We will enjoy doing it.

That’s your only warning. And remember: nobody is going to be able to save you. If the President, the DSCC, the DCCC, the DNC, the SEIU, ACORN, and the netroots couldn’t manage a win in Massachusetts… what do you think that they can do for you?

Rush Limbaugh: Massachusetts Voters Turn Out in an Attempt to Save the Nation

Limbaugh on Brown's win: "This one's for you, Mary Jo."

Senator Jim Webb calls for an end to ObamaCare:

In many ways the campaign in Massachusetts became a referendum not only on health care reform but also on the openness and integrity of our government process. It is vital that we restore the respect of the American people in our system of government and in our leaders. To that end, I believe it would only be fair and prudent that we suspend further votes on health care legislation until Senator-elect Brown is seated.

Posted by Moneyrunner at 1:59 AM