The UK Daily Mail published an article by David Rose illustrating the growth of ice at the poles, the "unusual" colder winter weather and the revelation that climate scientists are now coming out of the closet and talking about global cooling. Now that the global warming cabal has been exposed as hoaxers, those who were muzzled or afraid to speak out are now being quoted.

The bitter winter afflicting much of the Northern Hemisphere is only the start of a global trend towards cooler weather that is likely to last for 20 or 30 years, say some of the world’s most eminent climate scientists.
Their predictions – based on an analysis of natural cycles in water temperatures in the Pacific and Atlantic oceans – challenge some of the global warming orthodoxy’s most deeply cherished beliefs, such as the claim that the North Pole will be free of ice in summer by 2013.

According to the US National Snow and Ice Data Centre in Colorado, Arctic summer sea ice has increased by 409,000 square miles, or 26 per cent, since 2007 – and even the most committed global warming activists do not dispute this. 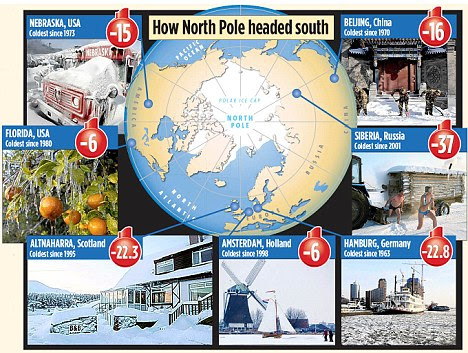 The "global warmers" are standing by their predictions. What else can they do?
Posted by Moneyrunner at 6:47 AM