"Naked Mole Rats Have the World's Ugliest, Most Sluggish Sperm"

James Taranto's "Best of the Web"


If They Want to Reproduce, They'd Better Get Some Clothes On

They breed in the dark ... which is not surprising. 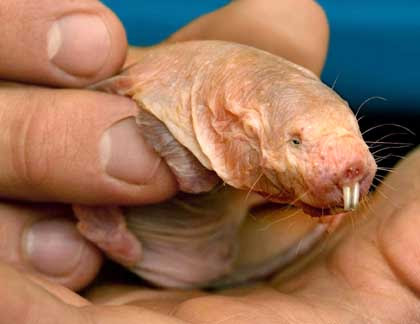 But some people say they are much cuter.

And they have their own blog. I'm not sure that Henry Waxman does.


Naked mole rat colonies contain just one sexually active male – and the lack of competition has left its sperm shrivelled and sluggish.

It turns out that the reason for all this is that the Mole Rat colony is dominated by a female.


Naked mole rats live in colonies dominated by the queen, who chooses one male at a time to mate with. She suppresses the reproductive instincts of every other male in the colony. Because the chosen male has exclusive mating rights, he can afford to produce sperm that will dawdle on their way to the egg.

All this fascinating information is brought to you by evolutionary biologists and published by BMC
and the articles are peer reviewed.   Just like all the global warming climate change research.