"Religion of Peace" at work

From the NY Times:

A suicide attack on a historic church in northwestern Pakistan killed at least 78 people on Sunday in one of the deadliest attacks on the Christian minority in Pakistan in years.

In March, a Muslim mob swarmed through a Christian neighborhood in the eastern city of Lahore, burning two churches and more than 100 houses. Christians also frequently find themselves accused of blasphemy under Pakistan’s strict blasphemy laws. 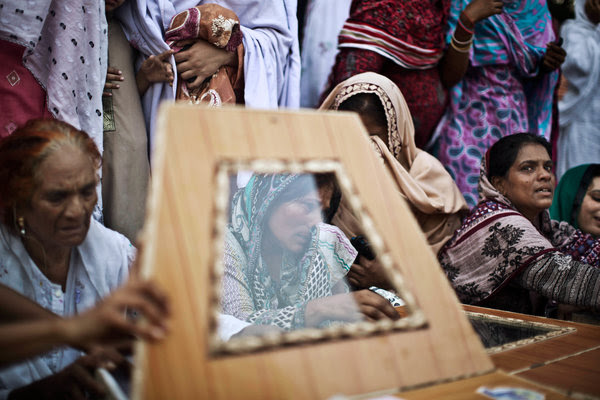 And from the UK Daily Mail

'If they found me, I'm white... so I'm dead': Survivors reveal how gunman executed non-Muslims - after asking them to name Prophet Mohammed's mother.
Survivors said they saw fellow shoppers mercilessly executed after being singled out as non-Muslim.
Shoppers said people were lined up and gunned down for failing to recite passages from the Koran.

Men, women and children were lined up and then gunned down with AK-47s after failing to name the Prophet Mohammed’s mother or recite passages from the Koran – sure-fire proof they were ‘kafirs’, or non-believers.

I don't know why these Muslims are being labeled as "extremist" by the writer of the Times article.  They sound like devout mainstream Muslims to me.

When you read the entire Times article note that the writers go to great pains to point out that the Muslims are also killing each other.  They noted that the dead included two Muslim police officers who had been posted outside the church. To underscore the point that Christians should not feel uniquely aggrieved there was this: "The attack coincided with a broader wave of attacks on religious minorities, including Shiite Muslims this year." And, of course, the bloody, mangled body of the "Religion of Peace" was being paraded once again: "In a statement, Mr. Sharif [Pakistan's Prime Minister] said, “The terrorists have no religion, and targeting innocent people is against the teachings of Islam and all religions.” The Pakistan Ulema Council, the largest clerical body, also condemned the blast, saying that the council was “standing with our Christian brothers in this tragedy.” The opposition leader Imran Khan, who has advocated initiating peace talks with the militants, expressed solidarity with the Christian community but also repeated his call to tackle terrorism in the country.
So, you see, brothers and sisters, the fact that Christians, a tiny minority, are being exterminated in a Muslim land, is not an indication of religious persecution, but an accidental by-product of an amorphous thing the Times call terrorism.  And lest you think the Times is alone in this, don't be silly.  They set the tone for the rest of the MSM.  If you call it anything else, or point to a particular religion as the driving force, you are a bigot. Get it?