Why a is academia such a hellhole of foul mouthed bigots?

A professor at Georgetown University went into an unbelievable foul-mouthed meltdown that lasted 31 days after a Muslim ex-colleague said she voted for Donald Trump.


C Christine Fair, an associate professor at the Center for Peace and Security Studies, was incensed after Asra Q Nomani, 'lifelong liberal', wrote an article about voting for Donald Trump as a Muslim immigrant.

In her Washington Post article, Nomani said she was motivated by a distaste for Obama's edging around using the phrase 'Islamic extremism', the cost of Obamacare and what she saw as Obama's failure to help poor and rural Americans.

According to Nomani, on November 22, 12 days after her article was published, Fair began a sustained period of abuse on Twitter and Facebook.

In a letter of complaint to the university, Nomani said that Fair told her 'F**K YOU, GO TO HELL', and called her a 'wench', a 'fraud' and a 'fame-mongering clown show'.

Nomani added that Fair had called her 'chutiya,' or 'the equivalent of a "f**ker" in my native Urdu', and 'bevkuf', another Urdu word meaning 'idiot'. 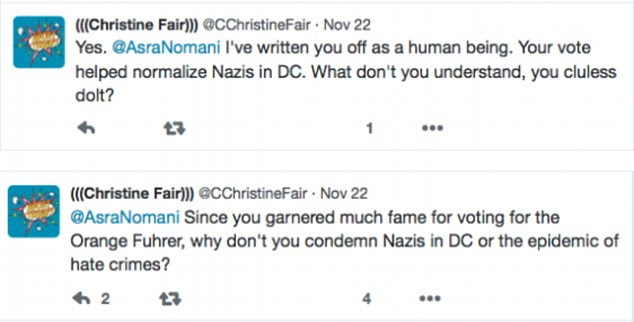 What is revealing about this and other rants by college professors is that they appear to have no idea that these foul mouthed, and very public, expressions of hate at anyone on the Right wrong.  This appears to be the "new normal" in academia.

Years of political correctness and Left-wing indoctrination have made violence - verbal and physical - acceptable on too many college campuses as long as the victims are to the Right of the enforcers.  These are the Commissars of the uniculture that rules the campus.
Posted by Moneyrunner at 7:26 AM