As the Insurrection Narrative Crumbles, Democrats Cling to it More Desperately Than Ever

Twice in the last six weeks, warnings were issued about imminent, grave threats to public safety posed by the same type of right-wing extremists who rioted at the Capitol on January 6. And both times, these warnings ushered in severe security measures only to prove utterly baseless.

Remember the riots that we were warned about at all 50 state capitols?  They never happened.

NPR intoned that “the FBI is warning of protests and potential violence in all 50 state capitals ahead of President-elect Joe Biden's inauguration.”

How about the insurrection that was going to occur in DC on "Inauguration Day"?

“But at the moment that Biden was taking the oath of office in Washington, the total number of protesters on the Capitol grounds in Topeka stood at five — two men supporting Trump and two men and a boy ridin’ with Biden,” 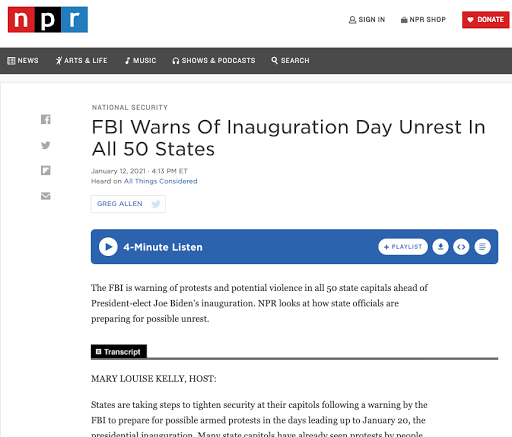 CNN, which spent a full week excitedly hyping the likely violence coming to state capitols by right-wing Trump supporters, was forced to acknowledge in its article about their non-existence that “one exception was Portland, where left-wing protesters damaged the Democratic Party of Oregon building during one of several planned demonstrations.”

Completely undeterred by that debacle, Democrats and their media spokespeople returned with a new set of frightening warnings for this week. The date of March 4 has taken on a virtually religious significance for the Q-Anon movement, announced NBC News’ Ben Collins, who was heard on NPR on Thursday speaking through actual, literal journalistic tears as he recounted all the times he called Facebook to plead with them to remove dangerous right-wing extremists on their platform...

(Two FBI operatives have since anonymously leaked that it is looking at a “suspect” who may have engaged with Sicknick in a way that ultimately contributed to his death. But nothing still is known; Sicknick’s mother claims he died of a stroke while his brother says it was from pepper spray; and all of this is worlds away from the endlessly repeated media claim that a bloodthirsty pro-Trump mob savagely bashed his head in with a fire extinguisher.)

What we know for sure is that no Trump supporter fired any weapon inside the Capitol and that the FBI seized a grand total of zero firearms from those it arrested that day — a rather odd state of affairs for an “armed insurrection,” to put that mildly. In questioning from Sen. Ron Johnson (R-WI) on Thursday’s hearing, a senior FBI official, Jill Sanborn, acknowledged this key fact:

Posted by Moneyrunner at 7:47 AM