Babylon Bee predicts the future under the Biden 1000 Year Reign 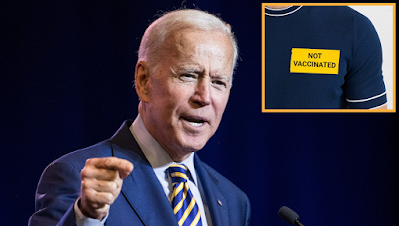 ...  the administration is also proposing some kind of mark or patch to identify the unvaccinated.

Vice President Harris took over. "We need to make all the unvaccinated peasants wear big yellow patches so everyone will know they're one of the undesirables," she said. "We will make them second-class citizens, and thoroughly shame them until their spirits are completely broken! HAHAHAHA HE HE HE HE!"

Dr, Fauci weighed in, saying patches are a "good idea," and that maybe 4 or 5 patches would be even better. "If you have 4 or 5 patches, it will make your icky unvaccinated self more visible to passers-by. That's according to all the latest science that I just did in my head just now."

Meanwhile Transportation Czar Pete Buttegieg is working on laying railroad tracks to desert camps where the unvaccinated can work hard until they are gone and they are no longer a problem.

Hmmmm, where have I seen that before?