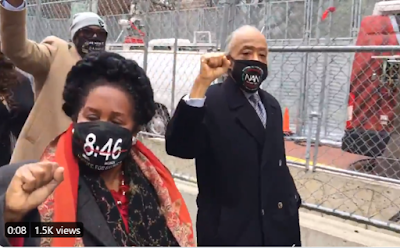 The jurors knew that the media covering the trial and looking at their faces every day for three weeks knows who they are. An in-state newspaper even signaled to the jurors its willingness to expose them to the violent mobs roving Minnesota over the last year by publishing descriptions of the jurors in advance of the verdict. Those descriptions published in the Minneapolis Star-Tribune contained age, race, location, profession, even immigration history.

You think jurors would have been willing to have themselves and their families go into witness protection to venture a reasonable doubt about Chauvin’s potential contribution to Floyd’s death? You think they’d be willing to trade their lives plus nationwide violence for one stranger’s? If you think that, you know nothing about human nature.

Officials from the local mayor all the way up to the president of the United States made it clear in widely reported news the jurors and all their family, friends, and neighbors could read and would have to live with for the rest of their lives that the only verdict they would accept was “guilty.” Democrat politicians openly called for violence if the jury did not decide as street thugs wished, and the Democrat Party — which controls all levels of the national government at present, as well as controlling the state in which these jurors live — backed them up.

The lesson everyone is learning is that threats and violence works. Be very concerned about the equal and opposite reaction.