Get Out the Gloat - The Left Gloats About the "Great Replacement" while telling you that talking about it is racist. 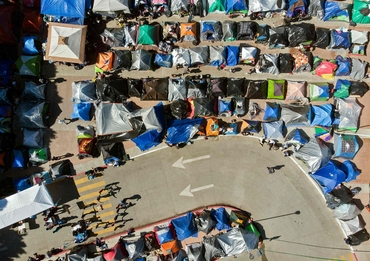 The other day, Ted Lieu, a Democrat congressman from the Post-Golden State, tweeted at one of his Republican "colleagues":

Dear @RepScottPerry: Native-born Americans like you are no more American, and no less American, than an immigrant like me. And with every passing year, there will be more people who look like me in the US. You can't stop it. So take your racist replacement theory and shove it.

Representative Lieu's response is the "Great Replacement" in a nutshell: It's a crazy conspiracy theory, and it's totally racist for you to mention it. But, if you do have to mention it, feel free to gloat. Mr Lieu does this brilliantly: it's nutso racey-racist conspiracy talk, but "you can't stop it", so "shove it", loser.

Like the congressman, I am an immigrant, but I am not sure I would say I was "no less American" than the native-born. I don't just mean legally, in that the constitution itself distinguishes between the privileges of the natural-born versus the naturalized: Mr Perry is eligible to be president, whereas Mr Lieu is not - although I would bet a canny petitioner could persuade the six-three "conservative" Supreme Court to toss that. But I mean the thought more generally: Most of my neighbors have deep roots in this soil, and I would regard it as very unseemly to go around bragging that my comparative blink of an instant in New Hampshire equates to those with ancient lopsided headstones in the town cemetery. I can't imagine standing up at Town Meeting and telling them that I'll be supplanting them and they've got no choice but to get used to it - so "shove it".

And as for the useless Republicans:

The Democrats announce upfront where they're headed - and the Republicans then profess to be blindsided when they act on it (as in HR1, court-packing, transgender sports, you name it). By contrast, he leaders of Conservative Inc, as I observed so many years ago now, are so good at folding they should be the White House valets: The so-called "America First" caucus has imploded at the first hostile news story, and Kevin McCarthy ... has already decided his priority is to distance himself from "nativist dog whistles". "Dog whistle" is leftie lingo: Could Useless McArsepants at least get one of his six hundred staffers to find him a cliché of his own?

California is not a small state: Its population is that of Belgium, Greece, Sweden and Portugal combined. And the swift, dizzying, demographic eclipse of the population in two generations is, as I suggested, unprecedented in any society not on the losing end of a catastrophic war.

Maybe it will all work out, but it doesn't seem to be, not if you need to get anywhere in Los Angeles in under two hours or you object to San Francisco's world leadership in sidewalk fecal matter. But before that is a more basic point: This is not how normal societies function. It is deeply weird, and it ought to be possible to question it. Instead it is any objection to this suicidal trendline that is presented as weird and, increasingly, forbidden to be uttered.

That was a really great! Thanks for the data and the supporting information.