Our rulers are insane 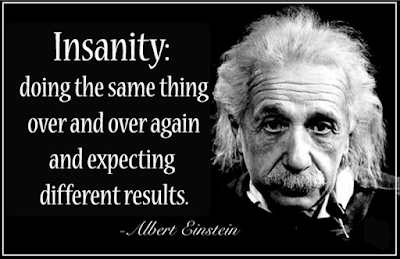 Einstein probably didn’t say it, but there is a basic truth in this aphorism.  The problem with today’s Communists who excuse the crimes of past experiments with Communism is attributed to an incredible helping of hubris.

Jordan Peterson responds to "REAL communism has never been tried" and murders it with fire 🔥⚰️ pic.twitter.com/Xyj2e1UFpI

Just how insane, arrogant, and filled with the belief in their righteousness are the people who rule us?

They decided that the best way to stop a virus for which there is no cure is to shut down the economy, shutter the small shops but keep the big stores open.  There was a brief dip in the stock market until investors realized that major corporations would benefit from having their small competitors driven out of business.  Meanwhile, average Americans are scarred, mentally, for life.

They decided that a bat virus that spread throughout the world from Wuhan, China, killing millions, could not possibly have come from a laboratory in Wuhan that experiment on ways to make bat viruses more deadly.

They decided to repeat the Weimar experiment by printing trillions of new dollars with nothing to back them and telling us that the inflation of prices for fuel, food, clothing, and housing is minor and only temporary.

They decided that the best way to get more people to work is to give free money to people for not working.

They decided that the best way to build the American military is to attract women with two mommies and discharge officers who criticize Marxism.

They decided that the best way to eliminate racism is to accuse people of racism because of the color of their skin.

They decided the best way to make American companies more competitive is to increase their taxes.

They decided the best way to reassure Americans that their elections are fair and honest is to eliminate the need to show your identity before you vote.

Posted by Moneyrunner at 9:14 AM

Labels: Our rulers are insane