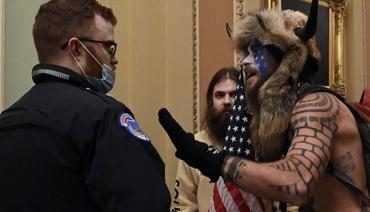 Likewise, the Capitol Police is not really a police force. It's a personal security guard for the Emirs of Incumbistan. That's why they're exempted from the freedom-of-information laws that apply to real constabularies: If Ashli Babbitt had been shot dead by an officer of the Dead Moose Junction Municipal Police Department, you'd know his name; but she was shot instead by a member of the Congressional Praetorian Guard, and thus you have no right in law to know his name. This is yet another example of the political class opting out of the legal regime they impose on everybody else.

The biggest lie of January 6th was that the "rioters" were somehow responsible for multiple deaths that day. Very belatedly, the DC coroner confirmed that, aside from Ashli Babbitt, everybody dead had died of natural causes - including Officer Sicknick, whom most Americans still believe was murdered by Trump supporters bludgeoning him with a non-existent fire extinguisher. The Capitol Police, in both their formal statements and their leaks to media chums, helped advance that lie.

Posted by Moneyrunner at 8:20 AM