The Left has escalated the violence against Conservatives and the Right, shooting and killing an anti-abortion protester ...

Authorities have charged an Owosso, Michigan, man with two counts of first-degree premeditated murder in the Friday shooting deaths of an anti-abortion activist and another man, a prosecutor's office said. 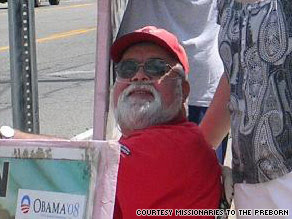 Operation Save America, the anti-abortion group of which Pouillon was a member, said in a written statement that he was "well known for his love of Christ and unborn children."

Authorities say the suspect, Harlan James Drake, was offended by anti-abortion material that the activist had displayed across from the school all week.


And threatening to bomb a Tea party gathering.

On the eve of what organizers call a 'Big Ol' TEA Party', the Washington, D.C., offices of FreedomWorks were evacuated by DC Metro police on Friday afternoon after the conservative organization reported to authorities at 3:42 pm ET that it had received a bomb threat.

Posted by Moneyrunner at 9:39 AM

I know we are going crazy protesting against Abortions; however, have we lost the reason why abortions are being considered???? It’s called “Sex” and most of these are out of marriage…this is what we need to be discussing in order to stop putting the band aid on abortions…then we will see less of them taking place…Please, let’s talk more about Abstinence…