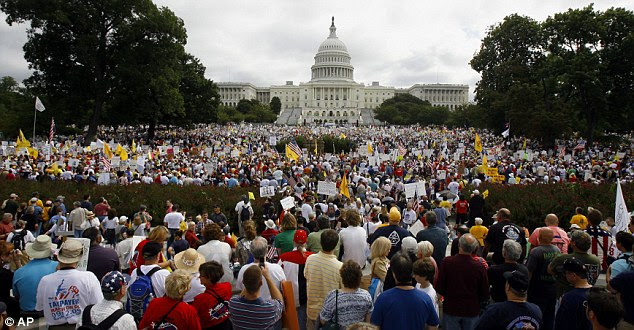 Via the UK Mail:

Up to two million people marched to the U.S. Capitol today, carrying signs with slogans such as "Obamacare makes me sick" as they protested the president's health care plan and what they say is out-of-control spending.
The line of protesters spread across Pennsylvania Avenue for blocks, all the way to the capitol, according to the Washington Homeland Security and Emergency Management Agency.

People were chanting "enough, enough" and "We the People." Others yelled "You lie, you lie!" and "Pelosi has to go," referring to California congresswoman Nancy Pelosi. 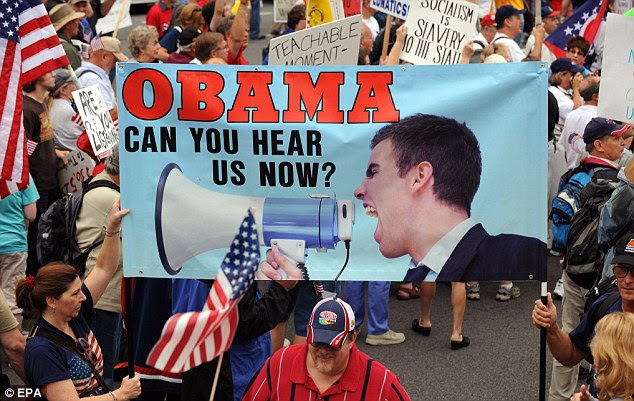 How CNN is lying about it: CNN, "making it up" as usual

Yesterday, CNN reported that at the Tea Party protest in Washington DC, Nazi imagery and a poster of President Obama as an African witch doctor were popular images. A friend and former law firm colleague who spent hours at the protest says this isn't true. He tells me: "I saw a couple of signs out of thousands that said 'Hitler gave good speeches too' and a few of the Obama zombie like images that have been around the internet." But CNN is "simply making [it] up" when it claims that Nazi imagery and a post of Obama as a witch doctor were popular images at the protest.

It was a very civil crowd, and a very large one. We probably talked with 100 people, plus or minus. From all over the country. I recall talking with folks from California, Oregon, Montana, Texas, Missouri, Illinois, Michigan, Indiana, Ohio, Kentucky, Tennessee, Alabama, Arkansas, Pennsylvania, New Hampshire, Maine, North Carolina, South Carolina, Connecticut, and New Jersey, not to mention assorted "locals" from Virginia, Maryland, and DC.

There were many, many signs, and I'd say that 95% + were hand made. The slogans ran the gamut, but most were on the general theme of spending and government intervention is out of control, we can't afford it, we're scared by where Obama is trying to take the country, and the like.

On the other hand, ABC claims that attendance at the rally made the number "thousands"

Carrying signs depicting President Obama as Adolf Hitler and the Joker, and chanting slogans such as "'No big government" and "Obamacare makes me sick," approximately 60,000 to 70,000 people flooded Pennsylvania Ave, according to the Washington DC Fire Department.

And this from a participant:

This was the first protest I've ever attended. And to be completely honest when coming upon 60-70 thousand people (or however many it was) I expected there to be a few racist signs as well as a few racist comments (there's thousands of people and some are bound to have these horrible flaws about them). I was there for 6 or 7 hours and I came across NONE. Zero. Not one racist sign or comment. And in fact, 1/3 of the speakers I heard were black.

Who is the DC Fire Department spokesperson who gave the estimate? I tried called them and got a recording asking me to leave a message. Below is a time lapse video of the crowd and that was closer to millions than thousands.

Image of crowd from Michelle Malkin

My husband was in DC for the march. He saw no such signage. He was there for about six or seven hours and walked the parade route and then circled around in back of the Capitol. When I told him what one of the news sources said he said he hasn't seen any of those witch doctor/swastika signs yet. The MSM is running scared because I believe their days are numbered. What amazes me is that people actually read and watch them and they won't admit they're lying. Their denial has been elevated to the highest art form.the liberal media lie!