Barone reflects on the media's coverage of the ACORN story

Michael Barone on his shock about ACORN

I posted my analysis of the 345-75 vote in the House to defund ACORN yesterday, and Byron York provides an excellent analysis of the issue today. But I have to say that I am still stunned by the conduct that filmmaker James O'Keefe and his sidekick Hannah Giles documented at several ACORN offices. Of course I was familiar with the plentiful charges of vote fraud by ACORN affiliates, documented by John Fund of the Wall Street Journal over the years, and National Review’s Jim Geraghty helpfully collects some past stories about ACORN employees’ illegal behavior in Ohio, Wisconsin and New Mexico—all target states in the 2004 and 2008 elections....

But back to ACORN. What stuns me is that, for all my knowledge of ACORN employees’ illegal behavior, it never would have occurred to me that so many of them would blithely collaborate in encouraging prostitution—and child prostitution at that! One ACORN defender said, in effect, well, that’s what you get when you hire low-income people; but I refuse to believe that that’s standard operating procedure even in the most disadvantaged of demographics. What is it about the culture of ACORN that makes collaboration in prostitution standard operating procedure?

And reflects on the Drive-by Media's reaction:

The Washington Post news pages, curiously, look for explanations in other quarters. They’re less interested in the culture of ACORN than in the motivations of filmmaker James O’Keefe and his colleague Hannah Giles, who posed as pimp and prostitute in ACORN headquarters and provided the resulting videos to Andrew Breitbart’s Big Government website. The Post’s Thursday news story (headlined “ACORN to review incidents”) helpfully identifies Giles as “the eldest daughter of a conservative Christian minister in Miami.” (Questions for the reporter: Does it make any difference that she’s the eldest rather than, say, the second eldest? On what basis do you characterize the minister as conservative, and why is that relevant? You characterize the minister as “Christian,” but aren’t all ministers in the U.S. Christian, or are you just trying to distinguish him from a cabinet minister?)

The Post’s Friday story (“The $1,300 mission to fell ACORN”) reads as if the reporters were assigned to find out what nefarious right-wing outfit financed their operation and came up empty. They did manage to include two paragraphs on the beliefs on Giles’s father, apparently on the theory that it illuminates her motivation. Then it segues to an account by ACORN sources of how the two were thrown out of an ACORN office in Philadelphia when they mentioned 13-year-olds (but not when they mentioned prostitution?). I guess the idea is to discredit Giles and by inference O’Keefe as religious fanatics whose motivations should lead readers to disregard what’s on their videos.

Who do you believe, the newspaper or your lying eyes? 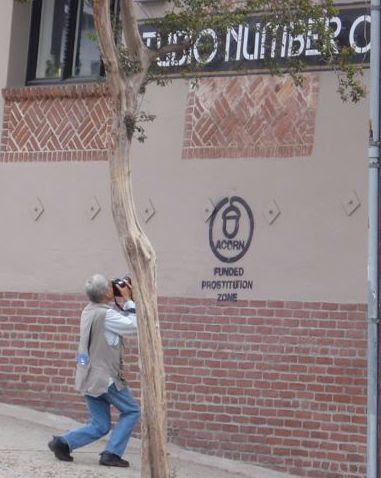 Prostitution: Do it for the Children. (An ACORN Public Service Announcement)
Posted by Moneyrunner at 2:51 PM