Beijing's Man on the Inside 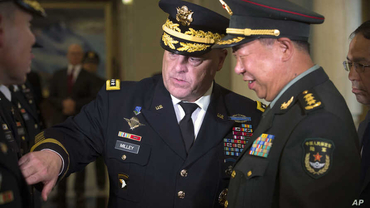 .... the Pentagon has decided to fast-track things and pre-lose the next war:

Twice in the final months of the Trump administration, the country's top military officer was so fearful that the president's actions might spark a war with China that he moved urgently to avert armed conflict.

In a pair of secret phone calls, Gen. Mark A. Milley, the chairman of the Joint Chiefs of Staff, assured his Chinese counterpart, Gen. Li Zuocheng of the People's Liberation Army, that the United States would not strike, according to a new book by Washington Post associate editor Bob Woodward and national political reporter Robert Costa...

"General Li, I want to assure you that the American government is stable and everything is going to be okay," Milley told him. "We are not going to attack or conduct any kinetic operations against you."

In the book's account, Milley went so far as to pledge he would alert his counterpart in the event of a U.S. attack, stressing the rapport they'd established through a backchannel. "General Li, you and I have known each other for now five years. If we're going to attack, I'm going to call you ahead of time. It's not going to be a surprise."

So America's "top general" secretly pledged to the ChiComs that he'd give 'em a head's up if his soi-disant commander-in-chief was planning anything...

There are phrases to describe countries where the military isn't under the control of elected officials, and "republic of self-governing citizens" isn't one of them.

As I've said multiple times in recent weeks, key American institutions from the CDC to the NBA act as if the Chinese have already won. The Pentagon has apparently joined them. You don't need to penetrate Thoroughly Modern Milley: He's his own Fang Fang.

Posted by Moneyrunner at 6:38 AM