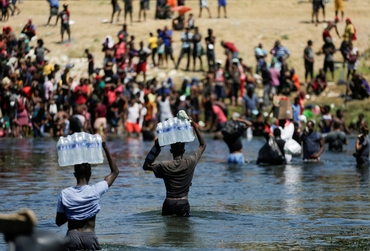 Mark Steyn's essay: "The Long Term's Express Check-In"   gets it exactly right when he says:

The western world's descent into suicidal madness is so well advanced that even so-called conservatives cling to small-ball arguments: oh, why hasn't Kamala or the Homeland Security guy visited Del Rio? Who cares? And what exactly is the "crisis" at America's southern border?

Why does my e-mail consist of dozens of whiney messages from emasculated Republicans complaining that Nancy Pelosi or President Asterisk is breaking the rules?   When the Chairman of the Joint Chiefs of Staff calls the Chinese to tell them that he will call first and give them a heads up before any attack he's actually planning to have his own soldiers killed as they rush into an ambush.   Having a traitor as America's top military officer makes Milley a modern day Benedict Arnold.  That's a worse problem than Biden mumbling a speech and walking away from the podium without answering questions.

And what questions would he get from the bought-and-paid-for Washington Press Corps?  They helped him get elected, covered up for his drug-addled son, and hid the fact that his entire family is wealthy because it was bought and paid for by American corporations and foreign governments.  Joe Biden is the Manchurian Candidate in the flesh, the Chinese Communist Party owns him.  They also - not so incidentally - own Disney as well as the parent companies of all the major news networks, all the multinationals who bet their bottom-line on selling stuff to 4 billion Chinese consumers, the sports leagues like the NBA who earn billions from Chinese sports fans ... and the list goes on.  They're scared to death to say anything bad about the CCP because if they do, Chairman Xi shuts the door to them and the gravy train stops.

Most people have great difficulty comprehending "long-term" trends, even after they've happened: Listen to the pitiful wankers on talk-radio bleating about where Ronald Reagan's California has gone or whatever happened to Orange County. Listen to the ludicrous constitutional fetishists thinking that a magic piece of parchment can convert to the cause of liberty and small government hundreds of thousands of unskilled economic migrants wading across the river every month and going straight on welfare. Where are they gonna learn that? Thomas Jefferson George Floyd Elementary School?

The first step for saving America is to rid ourselves of every so-called "leader" claiming to be Conservative.  Get rid of every single one.  To quote "Aliens" Ripley: "nuke them from orbit, it's the only way to be sure."  After we get rid of the traitors in our midst, we can begin to re-assemble the country.

Posted by Moneyrunner at 6:33 AM

Labels: Nuke them from Orbit, Steyn