The Klan Was Never This Effective 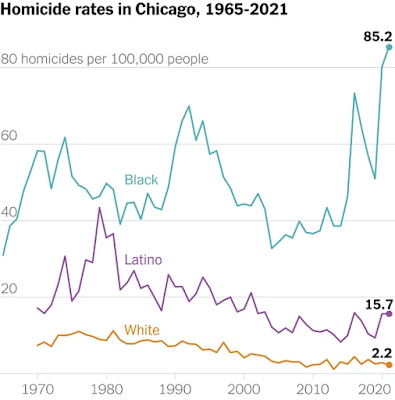 Black Chicagoans are nearly 40 times more likely to be shot to death than their white peers, according to an analysis by the University of Chicago Crime Lab.

There’s just no dressing this up. The reality depicted here is a disgrace and a scandal. If Alabama or South Carolina or some other “Trump” jurisdiction had a murder rate of black people forty times what it is for whites, do you think that might get, say, at least a smidgen of the anguished publicity the MSM gave the recent mass shootings, grotesque as they were? Do you think Merrick Garland might be able find his way to the microphone? Or Joe Biden?

Still, the gross imbalance in the Left’s well-hyped outrage, revealing as it is, is not the main problem. The main problem is murder, and specifically the out-of-control murder of black people. Although the problem is particularly awful in Chicago, it exists to a lesser but still appalling extent in the country as a whole. Overall in the United States, blacks are 12.5% of the population but 53% of the murder victims.

Does it need to be said that almost all of the killers are also black?