There is something fundamentally wrong with a society or culture in which this act is repeated frequently. It is a Muslim social problem. This is not found in any other society.

There is something wrong with a culture that turns its eyes away and refuses to recognize that this is a problem. Liberalism averts it's eyes and will not admit that this is a crime associated with Muslim society. It's the reason why grannies are searched in airport check-in lines. It's political correctness with a suicide wish.

Horrific details have been revealed of the last hours of the young Kurdish woman murdered by her family for falling in love with the wrong man.

Banaz Mahmod, 20, was brutally raped and stamped on during a two-hour ordeal before being garotted.

One of her killers, the Old Bailey was told, was 30-year-old Mohamad Hama, who had been recruited by Banaz's father Mahmod Mahmod, 52, and his brother Ari, 51.

Both were found guilty of murder last month.

The shocking details of the killing came to light when Hama was secretly recorded talking to a friend in prison.

He admitted "slapping" and "f***ing" Banaz, who was subjected to degrading sex acts.

Hama and his friend were heard laughing as he described how she was killed in her family home in Mitcham, South London, with Ari Mahmod "supervising".

The murderers - two other suspects have fled to Iraq - had been told Banaz would be on her own.

Hama is recorded as saying: "Ari (the uncle) said there is no one there. There was someone there, Biza (her sister). The bastard lied to us."

He said of the murder: "I swear to God it took him more than two hours. Her soul and her life would not leave." 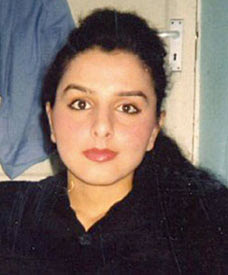 The Muslim men and family members who did this:

The trial of the two brothers heard that Banaz was killed because she had walked out of an unhappy arranged marriage - which she was forced into at just 17 - and fallen in love with Iranian Kurd Rahmat Suleimani, 28.
Posted by Moneyrunner at 6:35 PM