News from around the world.


Unrest spread in southern Syria on Monday with hundreds of people demonstrating against the government in three towns near the main city of Deraa, but authorities did not use force to quell the latest protests.

The fighting “should recede in the next few days,” Gates said at a press conference in Moscow today. Opposition fighters advanced on the central gateway city of Ajdabiya, which is held by loyalist troops, according to the Associated Press. Qaddafi’s army units continued to shell the western, rebel-held city of Misrata for a second day, residents said.


Who's in charge? Germans pull forces out of NATO as Libyan coalition falls apart

Deep divisions between allied forces currently bombing Libya worsened today as the German military announced it was pulling forces out of NATO over continued disagreement on who will lead the campaign.


A German military spokesman said it was recalling two frigates and AWACS surveillance plane crews from the Mediterranean, after fears they would be drawn into the conflict if NATO takes over control from the U.S.
The infighting comes as a heated meeting of NATO ambassadors yesterday failed to resolve whether the 28-nation alliance should run the operation to enforce a U.N.-mandated no-fly zone, diplomats said.


Opening the debate on French involvement in Libya, French Prime Minister Francois Fillon reiterated that the intervention was intended to stop attacks against Libyan civilians, and nothing more.


President Barack Obama should be impeached for approving air strikes against Libya, Rep. Dennis Kucinich said in an interview Monday.

When the Abu Ghraib scandal broke in 2003, the mainstream media and liberal blogosphere couldn’t find enough column inches to express adequately their shock and revulsion. The New York Times alone published 56 stories on the hideous revelation that members of the U.S. Army Reserve had tortured prisoners of war and posed for “trophy pictures”—inexcusable acts that the Times placed squarely at the feet of then-president George W. Bush.
What a difference a president makes. Until you flash forward to today’s bombshell, dropped by the British newspaper The Guardian, noting that members of a self-styled U.S. Army “kill team” posed for photos not with tortured prisoners but with corpses. Of civilians. Whom they had killed.
So far, the White House has released no statement regarding the images or accounts. Neither, surprisingly, has the New York Times.

..."I have always said, heard, that it would not be strange that there had been civilization on Mars, but maybe capitalism arrived there, imperialism arrived and finished off the planet," Chavez said in speech to mark World Water Day.


A female war photographer from the New York Times revealed tonight how she was repeatedly sexually assaulted during her nightmare hostage ordeal in Libya.

See how those photos of fighting are actually staged. 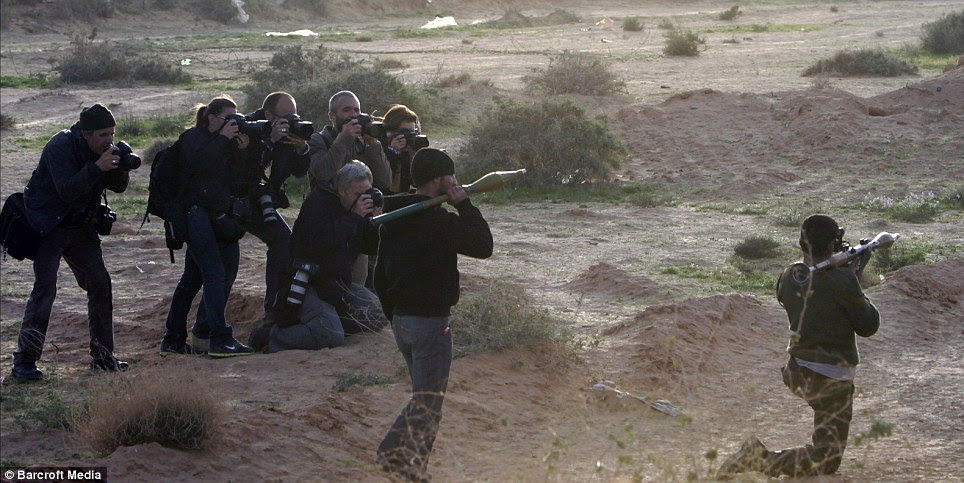 Posted by Moneyrunner at 7:45 AM

I saw this picture of the photo journalists and it looked to me like photographers at a football game, certainly not a war.