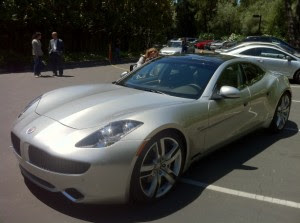 This car, which you can buy for a mere $100,000, was brought to you by a half billion dollar loan from the US Department of Energy, made in Finland using batteries and electric motors made in China.
But I'll let Andrew explain it:


Our tax dollars at work… a half-billion dollar loan (actually $529 million) from the U.S. Department of Energy to develop a hybrid toy for the wealthy and/or celebri-licious (like Leonardo DiCaprio, one of the first customers) that, in real world driving, won’t get much better mileage than your average crossover utility vehicle. Not only that, but the cars are manufactured in Finland — that’s right, Finland – and shipped here for sale, where their purchasers will then receive a $7,500 tax credit for buying one (the “cheap” base model starts at $96,895, with the full-zoot Eco Chic model going for a bargain $108,900).

What is the Department of Wasting Tax Payer Dollars Energy's excuse for this over-the-top extravagance? It runs partly on batteries, getting you 32 miles away from your garage before the turbocharged engine kicks in, delivering 20 miles to the gallon!
That's right! A range of 32 miles on batteries for a six figure car!


I have no problem with a group of entrepreneurs raising money from private investors to build a hundred thousand dollar toy for rich folks who want to flaunt their eco-consciousness. When and if that’s the case, may they have all the mazel in the world. But damn, it steams me up when my family and every family in America are forced to pay for it.
Al Gore is on the list of customers waiting to receive their Fisker Karmas, having put in his order before the DOE signed off on the company’s half-billion dollar loan. Oh, and by the way, it just so happens that several major investors in the company are also major donors to the Democratic Party. And here’s information on John Doerr, an advisor to President Obama who is also a major investor in Fisker Automotive. Can you say, “crony capitalism?”

The people in this administration are showing all the characteristics of the French nobility before the Revolution, exhibiting lavish lifestyles and providing images of wild extravagance as the people were starving. While Americans see their standard of living decline sharply the Obama’s throw lavish parties, take luxurious vacations and underwrite luxury toys for the rich while running up deficits that were unimaginable just three years ago. It’s as if taxpayers were French peasants, our money was Monopoly money and they represent a natural aristocracy.
It’s pitchfork time!

UPDATE:  ABC News has joined the party.  Amazing!
Posted by Moneyrunner at 5:23 PM

Unknown said...
This comment has been removed by the author.
5:22 PM

I love this brand. If you are interested in models of Fisker, you can check on fiskermiami.com for good prices :)))