If a Leftist disses John Lewis in the forest will the MSM be unable to hear it? Datechguy:


Lately I’ve been missing large chunks of Morning Joe due to Morning Mass but today I’ve been scanning the channels looking for the John Lewis Story on any of the Morning Shows.
I went to ABC, CBS, NBC in the 7 a.m. hour, I checked CNN and I started watching Morning Joe at 6:16. John Lewis? Not a word, is he Jerry’s kid brother?
To remind everyone who only gets their news from the left, over the weekend at the Occupy Atlanta protests the crowd refused to let Congressman and civil rights icon John Lewis speak declaring: “He’s no better than anyone else”.
Now if my wife and I were still in Maine with no laptop and the MSM as my only source of news, I would have no idea that this ever happened, nor would I know about GOP political consultant Ali Akbar’s invitation to Mr. Lewis to speak at a tea party event. 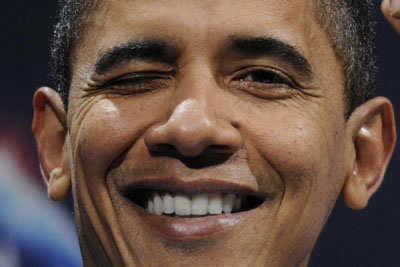 Posted by Moneyrunner at 1:15 PM