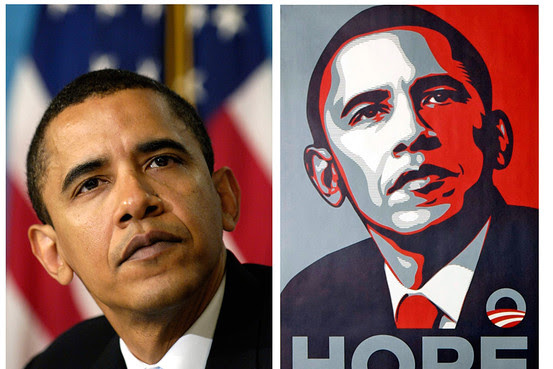 turns out to have been stolen by Shepard Fairey from the AP (Associated Press).

Fairey made millions from the photograph but lied about its provenance. The whole sordid tale is told by Gordon Crovitz  in the Wall Street Journal.  This led to the following comment by Jeffrey Shaw


The fact that the most identifiable item from the Obama campaign of 2008, was itself a product of fraud and deceit is perhaps the greatest bit of irony to emerge from this disastrous part of American history. I'm afraid i will not live long enough for that time 20 or 30 years from now when the pre-packaged and entirely fatuous "truths" of this charade of a Presidency are finally revealed by young and courageous historians for the charade that they truly are.

Posted by Moneyrunner at 9:42 AM