Mormons Should Riot and Kill

That's the lesson Mormons, and people of faith other than Muslims, should take away from the events of the last week.  You want the President of the United States, the Secretary of State and every Liberal who ever wrote a word in print or on the Internet to denounce those who make fun of you?  Rioting and killing is the answer.

Bret Stephens' column in the Wall Street Journal gives us an excellent example.  On Broadway there is a play openly mocking Mormons.


'Hasa Diga Eebowai" is the hit number in Broadway's hit musical "The Book of Mormon," which won nine Tony awards last year. What does the phrase mean? I can't tell you, because it's unprintable in a family newspaper.
On the other hand, if you can afford to shell out several hundred bucks for a seat, then you can watch a Mormon missionary get his holy book stuffed—well, I can't tell you about that, either. Let's just say it has New York City audiences roaring with laughter.
The "Book of Mormon"—a performance of which Hillary Clinton attended last year, without registering a complaint—comes to mind as the administration falls over itself denouncing "Innocence of Muslims." This is a film that may or may not exist; whose makers are likely not who they say they are; whose actors claim to have known neither the plot nor purpose of the film; and which has never been seen by any member of the public except as a video clip on the Internet. 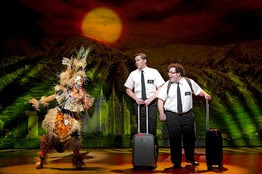 No matter. The film, the administration says, is "hateful and offensive" (Susan Rice), "reprehensible and disgusting" (Jay Carney) and, in a twist, "disgusting and reprehensible" (Hillary Clinton). Mr. Carney, the White House spokesman, also lays sole blame on the film for inciting the riots that have swept the Muslim world and claimed the lives of Ambassador Chris Stevens and three of his staff in Libya.
So let's get this straight: In the consensus view of modern American liberalism, it is hilarious to mock Mormons and Mormonism but outrageous to mock Muslims and Islam. Why? Maybe it's because nobody has ever been harmed, much less killed, making fun of Mormons.
Here's what else we learned this week about the emerging liberal consensus: That it's okay to denounce a movie you haven't seen, which is like trashing a book you haven't read. That it's okay to give perp-walk treatment to the alleged—and no doubt terrified—maker of the film on legally flimsy and politically motivated grounds of parole violation. That it's okay for the federal government publicly to call on Google to pull the video clip from YouTube in an attempt to mollify rampaging Islamists. That it's okay to concede the fundamentalist premise that religious belief ought to be entitled to the highest possible degree of social deference—except when Mormons and sundry Christian rubes are concerned.

And as a final point, Mormons: is there a fellow Mormon in jail for a crime that you don't think is a crime?  Polygamy perhaps?  Try rioting and murder and watch how fast the Liberals set your prisoner free.