Protesting the Antiwar Protestors? No! Showing Support for America and the Troops!

The Wall Street Journal reprints a column by Kevin Ferris, an assistant editor and columnist at the Philadelphia Inquirer.

It's a good article and it's subject, Rich Davis, is doing what I wish I could be doing in Norfolk.

Here's the start of the story (read the whole thing):

Memorial Day isn't until Monday. But for Rich Davis, a 20-year veteran of the Navy, it seems to come every Saturday. That's when he pulls out a handmade sign and heads for a street corner near the Chester County Court House in this suburban Philadelphia community.

Mr. Davis, 54, is a pro-military protester who makes a public stand each week in support of the troops and their mission.

Supporters of the Chester County Victory Movement rally on May 17, 2008.
In 2001, Mr. Davis retired from the Navy and ended up settling in West Chester, where he spent 2006 and 2007 watching antiwar protesters rally each Saturday from 11 a.m. until noon outside the courthouse near his apartment. The Chester County Peace Movement, Mr. Davis would later learn, had been demonstrating at the site since March 2003, when the U.S. invaded Iraq. At first he hoped someone would challenge the protesters, speak up for the troops, and defend their mission. On Sept. 8, 2007 he decided that someone had to be him. 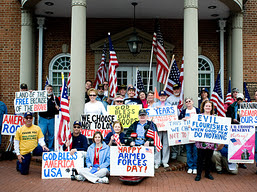 But I kept looking at the headline after reading the story and something bothered me. The headline made Davis' demonstration a reaction. In fact, while Davis was inspired by the anti-war protesters, he is not protesting them. He is demonstrating his love of country and support of the troops. His is a positive demonstration, not a negative one. it is the so-called "anti-war" demonstrators who are doing the negating.
Posted by Moneyrunner at 8:33 AM

Mr. Davis is an American Patriot. I am so tired of these old, stinking, tired, misfit, depressed hippies attempting to demoralize our brave men and women.
I reckon they feel so bad about their own failures, they must attempt to make everyone else as miserable.
Guess what, it's not working! Our brave soldiers are wise. They realize the fringe out there. They realize the misfits are lacking character. It does not effect our soldiers. Our soldiers are actually doing something for our great country, while the "peaceniks" are just making noise.