Via the Wall Street Journal ...

Can we understand why the state of California and its cities are in deep financial trouble?

Pete Nowicki just turned 51 and was eligible to retire. So he did. His pension was full pay (nice), plus he sold his unused vacation and holidays, raising his pension from a very healthy $186,000 to $240,000 - per year.

Pete Nowicki had been making $186,000 shortly before he retired in January as chief for a fire department shared by the municipalities of Orinda and Moraga in Northern California. Three days before Mr. Nowicki announced he was hanging up his hat, department trustees agreed to increase his salary largely by enabling him to sell unused vacation days and holidays. That helped boost his annual pension to $241,000.

..The boost was legal, and Mr. Nowicki said he is receiving a permissible pension. "People point to me as a poster child for pension spiking, but I did not negotiate these rules," he said.

Is this an isolated case?

Mr. Nowicki's situation isn't unique. Contracts that permit a jump in salary just before retirement -- boosting the pension payout -- have been around for years. But as tough times are putting more scrutiny on public pensions, Mr. Nowicki's case has sparked particular anger from colleagues and local residents. Some recently demanded an explanation from the department trustees and others have lobbied the Orinda council to divert funds away from the fire department.

"These guys may have priced themselves out of job," said Steve Cohn, a financial analyst in Orinda.

The practice is getting more attention amid growing concerns about the sustainability of guaranteed pension payouts for public employees after brutal market losses last year in public pension funds.

In California, which has taken to issuing IOUs to hoard cash, a private interest group has launched a campaign to publicize the names of government retirees with pensions of $100,000 or more to promote its view that steep pensions threaten to bankrupt states and municipalities. Mr. Nowicki's payout was brought to light in the spring in a Contra Costa Times column.

While it happens nationwide, pension spiking has been especially prevalent in California, which some attribute to favorable terms negotiated by powerful unions.

The cost of all this?

Mr. Nowicki recently turned 51 years old. If he lives another 25 years, his pension payments will cost the fire district an estimated additional $1 million or more over what he would have received had he retired at a salary of $186,000, not including cost of living adjustments, a fire board representative said.

To add insult to injury ...

In addition to drawing his pension, Mr. Nowicki currently is working for the fire department as a consultant at an annual salary of $176,400 while the department searches for his replacement.

If this is business as usual, the state is in bigger trouble than we realize. 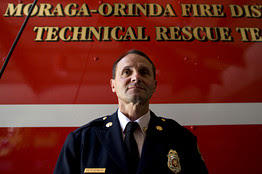 Posted by Moneyrunner at 7:49 AM