We should be concerned about the people who are going to be running the country during the next 3 1/2 years. This is about one of the Czars.

Forced abortions. Mass sterilization. A "Planetary Regime" with the power of life and death over American citizens.

The tyrannical fantasies of a madman? Or merely the opinions of the person now in control of science policy in the United States? Or both?

• Women could be forced to abort their pregnancies, whether they wanted to or not;
• The population at large could be sterilized by infertility drugs intentionally put into the nation's drinking water or in food;
• Single mothers and teen mothers should have their babies seized from them against their will and given away to other couples to raise;
• People who "contribute to social deterioration" (i.e. undesirables) "can be required by law to exercise reproductive responsibility" -- in other words, be compelled to have abortions or be sterilized.
• A transnational "Planetary Regime" should assume control of the global economy and also dictate the most intimate details of Americans' lives -- using an armed international police force.

Come on, this has to be an Internet hoax, right?

Click on the link for images from the book itself. We have a person in high government office to whom the "banality of evil" applies. 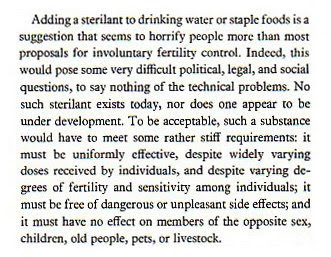 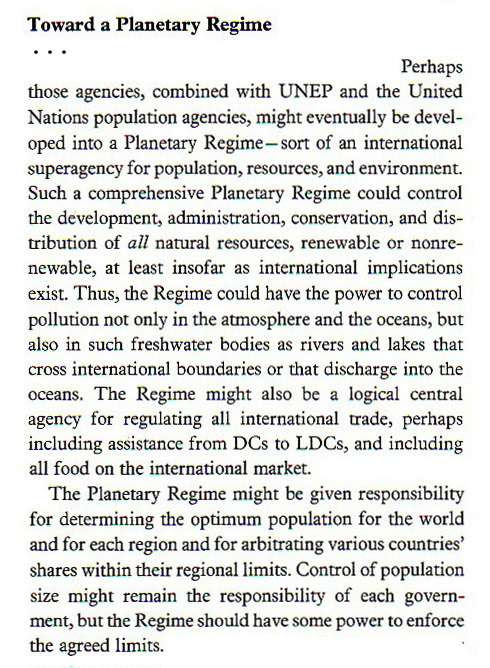 This is getting beyond strange and borders on frightening. The President of the US spent 20 years in a church run by a racist bigot who wished God to damn America - Jeremiah Wright; he pals around with violent Leftists who were responsible to bombing people and facilities - Bill Ayers, and appoints a would-be eugenics Fascist to be his science czar. Who else does he know, admire and want to help him run the country?
I don't expect laws passed in this country to limit the number of children, nor forced sterilization, or to have drugs placed on the water supply to make people sterile. But I am concerned about the direction of the government when people like this occupy high positions. It tells you the direction, if not the exact destination of government policy.
Posted by Moneyrunner at 12:41 PM

"This is getting beyond strange and borders on frightening. Wright, Ayers, and appoints a would-be eugenics Fascist"

What is scary is that the media are playing along with all this.