The race and diversity scam

Diversity creates a wonderful snafu in which there can be a black guy in the White House and double digit unemployment for other black guys. Sorry guys, the quota has been filled. There can only be one Obama. Everyone else is out of luck.

The double vision isn't accidental. It looks equal, but it's not. The game is rigged and diversity rigged it. And there's plenty to be angry about for everyone because in a rigged game everyone has just cause to be angry; except the people on whose behalf the game has been rigged. And those people aren't white people or black people. They are the people that the system uses to perpetuate itself. 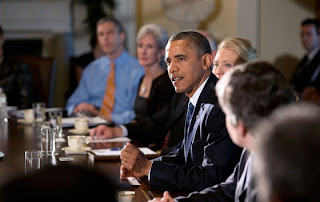 The system isn't white power or black power. It's just the system. It's a bunch of white guys who despise the South and wish they had a black friend, deciding which black guy to use for their diversity quota. They're doing it for the same reason that they display books they never read and invite interesting people over for boring dinner parties. Because it makes them seem smart. Because it makes them feel like something more than the overseers of the same repressive dreary system that exists to implement unfairness for the benefit of a few.

Black people are interesting, the white guys think, Asians aren't. Besides the Asians are more threatening because they can compete with all those white kids in retro black framed glasses. They are what the Jews were a few generations ago. And the quota stick is good for them too. But everyone gets hit with the quota stick by the system. Except those who are truly inside the system.

Read the whole thing and think about it. There are some really courageous things being said here.

The Sixties are never going away. They are the establishment. The people responsible for that mess run everything and arranged society so that you can experience their social failure over and over again. Racism and the fight against it is one of the things that they want you to experience, so you will experience it again and again, as they create and destroy racism like some strange racist gods.

Congressman John Lewis, who on the day when he can no longer stumble forth to mumble something about his time fighting for civil rights, will have to be stuffed as a mummy and wheeled around to meetings organized by white guys in retro glasses who want to experience what their grandfathers felt when marching along the street in Alabama or Mississippi, serves the same purpose as Buffalo Bill's traveling exhibition did. He's there to remind us all of something that no longer exists.

The civil rights movement is dead. In place of any real urge for equality is a determination to perpetuate inequality in order to keep the movement going. It's as if everyone wanted to keep the great feeling of winning WW2 alive by landing at Normandy, shelling random tourists and then invading Paris to liberate it from the Nazis while refusing to listen to the Parisians when they insist that the Nazi armies are long gone and all that's left are a bunch of skinheads listening to bad music.

Posted by Moneyrunner at 9:24 PM