Da Tech Guy goes shopping and notices that there are few black shoppers.  It turns out that the EBT (Electronic Benefits Transfer = aka food stamps) system is down.

I hit a local supermarket to pick up a few things on the way home from work. Right away I noticed something was odd (especially on a Saturday afternoon before a Red Sox playoff game); the place seemed devoid of shoppers.

When I got to the deli counter I heard an announcement that explained it; EBT was down, and no EBT cards could be accepted. This was apparently a statewide problem.

Right after being told they were out of my wife’s favorite Sara Lee Oven Roasted Turkey breast, I finished my shopping and made note of the number of non-white customers. Normally at this location the majority of the customers would be Spanish, and I counted 3 non-white people, as if the clock had been turned back to the 80′s for the city.

EBT of course is not only the province of people of color. As I was leaving a person whose only color was provided by her heavily tattooed body was entering the store. As I was returning my carriage I saw her leaving empty-handed.

A computer glitch in other areas had different results.  It showed EBT cards with unlimited balances. 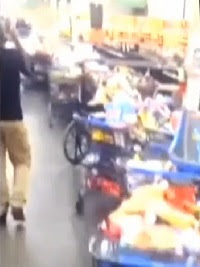 When the federal EBT food stamp system suffered a critical failure on Saturday, local retailers were disconnected from the federal food stamp database that keeps track of how much credit is left on each individual EBT card. Seizing the opportunity provided by the glitch, EBT card holders in Louisiana ransacked their local Wal-Mart stores, stuffing their shopping carts full of groceries and "paying" for them with near-empty EBT cards that essentially had unlimited account balances because all accounting was offline.

When the EBT database came back online and card purchase limits were suddenly restored, EBT card holders abandoned their full carts and just walked away, probably miffed that they missed out on participating in the felony theft of groceries.


Da Tech Guy (Peter Ingeni) went to three separate store to try to get some Sarah lee turkey breast for his wife and made this observation.

I shop in these markets on a regular basis and normally they are totally integrated, but the bottom line is with the EBT card system down I could count the number of non-white customers in three supermarkets on the fingers of one hand & still have fingers left over.

Anecdotal evidence or no that’s a startling thing and if I was a liberal I’d be embarrassed by it, but not as embarrassed as I’d be if I was a person of color seeing this and asking myself:

Is not being able to buy food for our families without the government’s aid my community’s reward for giving Barack Obama our votes in overwhelming numbers?

If you want to be angry at me for saying something that’s true, that’s your call. But I submit and suggest that your anger is better directed at the administration that caused my statement to be true in the first place.

I tweeted out my observation which prompted the following reaction

#ebt system down in ma, on an unrelated note the customer mix at market basket was considerablly different than normal #unexpectedly

.@DaTechGuyblog You are a piece of shit.

As someone remarked, the truth appears to be racist.
Posted by Moneyrunner at 7:36 AM