For more than a year, it has been consecrated media fact that former President Donald Trump and his White House, on June 1 of last year, directed the U.S. Park Police to use tear gas against peaceful Lafayette Park protesters, all to enable a Trump photo-op in front of St. John's Church. That this happened was never presented as a possibility or likelihood but as indisputable truth. And it provoked weeks of unmitigated media outrage, presented as one of the most egregious assaults on the democratic order in decades.

This tale was so pervasive in the media landscape that it would be impossible for any one article to compile all the examples. “Peaceful Protesters Tear-Gassed To Clear Way For Trump Church Photo-Op,” read the NPR headline on June 1. The New York Times ran with: “Protesters Dispersed With Tear Gas So Trump Could Pose at Church.” CNN devoted multiple segments to venting indignation while the on-screen graphic declared: “Peaceful Protesters Near White House Tear-Gassed, Shot With Rubber Bullets So Trump Can Have Church Photo Op.”

ABC News anchor George Stephanopoulos “reported” that “the administration asked police to clear peaceful protesters from the park across the White House so that the President could stage a photo op.” The Intercept published an article stating that “federal police used tear gas and rubber bullets to clear protesters from Lafayette Square in front of the White House,” all to feature a video where the first interviewee said: “to me, the way our military and police have behaved toward the protesters at the instruction of President Trump has almost been Nazi-like.”Nazi-like. This was repeated by virtually every major corporate outlet: 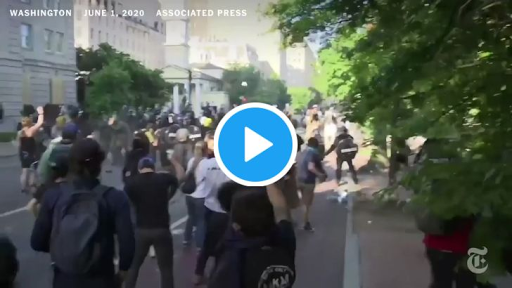 All of this came crashing down on their heads on Wednesday afternoon.

The IG's conclusion could not be clearer: the media narrative was false from start to finish. Namely, he said, “the evidence did not support a finding that the [U.S. Park Police] cleared the park on June 1, 2020, so that then President Trump could enter the park.” Instead — exactly as Hemingway's widely-mocked-by-liberal-outlets article reported — “the evidence we reviewed showed that the USPP cleared the park to allow a contractor to safely install anti-scale fencing in response to destruction of Federal property and injury to officers that occurred on May 30 and May 31.” Crucially, “the evidence established that relevant USPP officials had made those decisions and had begun implementing the operational plan several hours before they knew of a potential Presidential visit to the park, which occurred later that day."

Posted by Moneyrunner at 7:22 AM