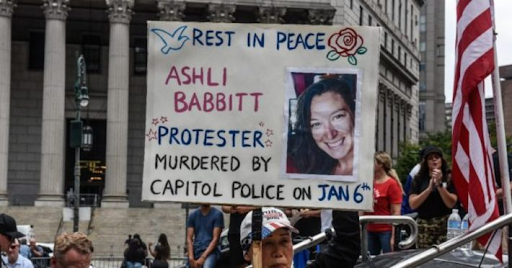 Speaking to media in Washington, Babbitt’s mother, Micki Witthoeft, said, “I’m here to commemorate the 6th, to exercise my first amendment right, to support the prisoners who showed up for America on the 6th last year”.

Witthoeft said those who were arrested in the aftermath of the January 6 attacks “were suffering for no reason” and were “losing their businesses, losing their houses, losing their lives – lots of them for little more than carrying a flag”.

You know, the flag that won our independence from foreign tyrants and saved our country at Gettysburg when the Republicans of Abraham Lincoln freed the slaves own by Democrats. Those who assembled in Washington D.C. on Ja n. 6 were largely there to protest domestic tyrants that used their cash and big tech censorship to manipulate an election and turn the government of the people into a government of, by, and for the likes of George Soros and Mark Zuckerberg.

Posted by Moneyrunner at 8:17 AM