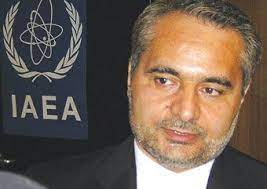 The State Department's notice to Congress was issued just days after a former top Iranian official bragged about the death threats against Hook in the Iranian media. Hussein Mousavian, a former member of Iran's nuclear negotiating team who works as a Middle East security and nuclear policy specialist at Princeton University, sparked a media firestorm when he was seen touting the threats against Hook in a documentary produced by Iran's Islamic Revolutionary Guards Corps.

"I went to America and an American told me that Brian Hook's wife can't sleep, she cries and trembles, she told Brian, ‘They'll kill you,' since Hook was a partner in the death of Haj Qassem [Soleimani], that's how much they were trembling," Mousavian said in the documentary 72 Hours, produced and released this month by a company tied to the corps.