A Tale of Two Rapes


Mark Steyn on the media and two rapes, one at UVA that didn't happen and on in Egypt that did.

Yesterday, the Police Chief of Charlottesville, Virginia gave a remarkable press conference, the upshot of which was, as the New York Times headline put it:

Police Find No Evidence Of Rape At University Of Virginia Fraternity


But the Left isn't willing to let go of such a great story, even if it's a total lie.

"Even if she made up the story", she "pulled back the curtain on rape". And even if there was no rape going on behind the curtain she raised awareness of how rape culture is so prevalent that women are being traumatized into making up stories that they've been gang-raped by seven Phi Kappa Psi men even when they haven't been. The blogger Oliver Willis thinks it's "super dangerous" that the right is seizing on the implosion of Rolling Stone's story to insist that "all rape allegations can be ignored". But isn't it the left that's trivializing real rape by according fake rape the same protected status? After all, if Jackie is incredibly "brave" for "coming forward" to "pull back the curtain" on something that never happened, if "gang rape" no longer requires either rape or a gang, if it is not necessary to have actually been attacked, brutalized and sexually violated in order to be a rape victim, then what's the big deal if one has been?

The media have now moved on. At CNN, they're worried that the police report on the total lack of any evidence for any rape might deter rape victims from coming forward:

"Other victims of sexual assault" is not quite le mot juste, given that there is no evidence that "Jackie" was ever assaulted by anybody at all. A better word would be actual victims of sexual assault. And, if real victims of real sexual assault are deterred from coming forward because a fabulist's pitiful fantasy was made front-page news by a gullible ideological media, that ought to occasion some circumspection from those, like Ms Ganim and Ms Hostin, who made the fabulist a pin-up girl in the first place. If CNN et al want someone to blame for real rape victims being reluctant to come forward, they should try looking in the mirror.


Meanwhile the victim of a real rape is ignored. 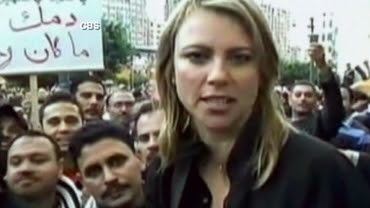 CBS News 60 Minutes correspondent Lara Logan is back in the hospital in Washington, D.C., due to years-long complications stemming from the brutal sexual assault she endured in Egypt while covering the Arab Spring in early 2011...


While the MSM were swooning like schoolgirls about the Arab Spring, real Arabs creating the Spring were showing what they thought of women.

Within minutes of Mubarak's resignation, the CBS reporter Lara Logan, covering events in Tahrir Square, was set upon by a 200-strong mob who stripped her, punched her, beat her with flagpoles, and subjected her to a half-hour sexual assault by multiple participants while shouting "Jew! Jew!" She's not a Jew, and she doesn't look the least bit like the hook-nosed stereotypes to which Arab cartoonists are so partial. But then, if you're the kind of Egyptian who thinks Mubarak is a "Zionist" and that the Mossad are putting GPS on sharks and sending them to terrorize sunbathers at Sharm el-Sheikh, she's close enough.

What's striking about this story is not so much that her own employer, CBS News, chose not to run it until over three days later - on the following Monday - but that in the intervening period they pumped out the same sappy drivel as everybody else - "Egypt's New Age Revolution" (60 Minutes), "Egypt Proved Change Is Possible, Sexy And Cool!" (CBS Sunday Morning) - even as they knew there was another side to the story, and that their own correspondent was lying in the hospital traumatised because of it.


It's the kind of idiot like John Adams who talks about the subjugation of women in Arabia but then - to show that America's just as bad - refers to Rush Limbaugh as an oppressor of American women.

This was a symphony for violin and some such movement or whatever, and the composer decided to take to the microphone and explain to the audience -- it's a black-tie audience, Avery Fisher Hall -- what it was that inspired this particular symphony or piece or movement that he was performing, conducting, whatever he was doing last night. And he said he had been in Paris, in Europe, and he was reading Arabian Nights, and he was reading other tracts.

And he was just stunned and he found out all of the discrimination and hatred and mistreatment of women in the Arab world. And then he paused and he said, "You can find that here on Rush Limbaugh." Nordlinger said what happened next sickened him. The audience in Avery Fisher haul applauded for nearly two minutes. The composer was referencing me as no different than militant Islamists and their treatment for women.


What we have here is the Perfect Liberal Moment, the self-satisfied opportunity to hate.


Self-satisfied hatred: a perfect phrase to describe liberal smugness and it’s consequent loathsome behavior. Substitute Garrison Keillor (for one) for John Adams, and the Fitzgerald Theater in St. Paul for Avery Fisher Hall, and you have another building block in my contempt for my former homies on the Left. They would hijack any event to hold a two-minute hate of George Bush. Or Dick Cheney. Or Don Rumsfeld. Or Condoleezza Rice. Or John Ashcroft.

But the self-satisfied part was even worse than the hatred. People like Adams and Keillor didn’t want a debate. They wanted unanimity. They picked their times, however inappropriate and incongruous, when they knew they’d get no argument. Even more, they’d get whoops of approval and howls of laughter. And I felt the same bile rising in my stomach that Nordlinger describes.

He was almost alone, but not quite. Rush was happy to share this story as he opened his show today. Later on, he got a call from a woman who was also in the Avery Fisher audience. She and her companion were both disgusted by the spectacle. When they booed Adams and screamed in defense of Rush, they were angrily told to shut up. Like I said, unanimity and nothing less.


As Jay Nordlinger says in his article in National Review:


You’re never supposed to analogize anything to the Nazis. That’s the rule. But sometimes I break the rule. And I believe I got a whiff — just a tiny whiff — of Nuremberg in Avery Fisher Hall tonight. Collective hatred, and self-satisfied hatred, based on damnable lies.

But I digress.  This was about two rapes.

Since the rise of ISIS, we now have an epidemic of gang rape and sex slavery across the region. What happened to Miss Logan told us something of the truth of Islam's "spring fever" - whereas the "change is sexy and cool" pap was as fake a narrative as "Jackie"'s.

These facts are too cold and plain to be expressed in a "multicultural" society which has told itself that, thanks to the joys of diversity, a nice gay couple and a polygamous Muslim with three wives in identical burkas can live side by side at 27 and 29 Elm Street. In America Alone, I mentioned two European women who'd taken to going out headscarved when their journeys took them through, ahem, certain neighborhoods. No young girl can safely walk in "scanty clothing" through Clichy-sous-Bois or Rosengard in Sweden. In La Courneuve in France, 77 per cent of covered women said they wore the veil to "avoid the wrath of Islamic morality patrols," as Claire Berlinski put it. She added: "We are talking about France, not Iran."


And a fool like John Adams, America Loather, tells "people like him" that America's just the same.  And the fools applaud, not because they accept the accusation, but because it gives them a moment to look around and tell themselves they - and the other well-fed America Loathers around them - are better people.  They are not like the "low sloping foreheads" outside of Manhattan, San Francisco, and the groves of academia.
Posted by Moneyrunner at 1:10 PM