Angel Outside Trump’s Empty Safe Tells FBI Agents, 'Behold! The Document You Seek Is Not Here!' 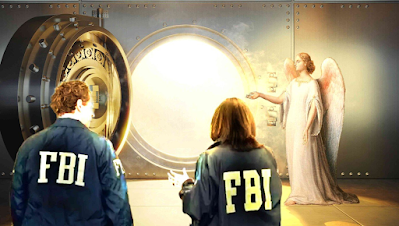 MAR-A-LAGO, FL — New reports from Mar-a-Lago indicate that during Monday's raid, FBI agents searching the house ran quickly to see the safe only to find it empty with an angel of the Lord standing beside it. According to eyewitnesses, the FBI agents trembled and became as dead men.

"Do not be afraid!" began the glowing angel, gesturing to the open and empty vault. "I know that you seek the classified documents taken by Trump. But behold! The Documents you seek are not here!"

"Now, go!" the angel continued. "Tell your boss, Director Wray, that the documents are not here, just as Trump said."

Trump responded to the incident, saying: "Low-IQ FBI agents searched my house and didn't find anything! Pathetic witch hunt! And they talked to my angel. Well, one of my angels. I have so many angels. All the best angels."

The FBI reported the incident to the FBI Director and Attorney General, who paid the agents to keep silent on the matter and instead tell everyone that Trump's disciples came by night and stole the documents while everyone slept.

Posted by Moneyrunner at 8:20 AM