The Face of Genocidal Eco-Fascism 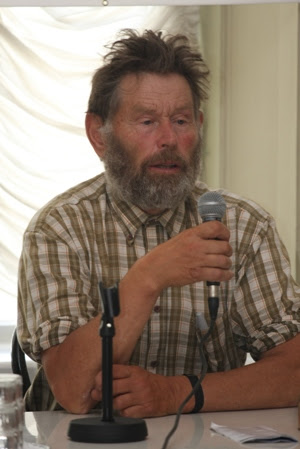 This is Finnish writer Pentti Linkola — a man who demands that the human population reduce its size to around 500 million and abandon modern technology and the pursuit of economic growth — in his own words.


He likens Earth today to an overflowing lifeboat:


What to do, when a ship carrying a hundred passengers suddenly capsizes and there is only one lifeboat? When the lifeboat is full, those who hate life will try to load it with more people and sink the lot. Those who love and respect life will take the ship’s axe and sever the extra hands that cling to the sides.

He's suggesting that humanity could be reduced via nuclear or biological weapons.   I'm fairly sure he will get a respectful hearing at a meeting of Greenpeace or most other environmental organizations. These are the fundamental ideas driving environmental policy nowadays. It’s Himmler in a green shirt. These are not nice people who want good things for everyone. These are evil people who hanker after mass death.   Jusr as many on the Left declared that 9/11 were "America's chickens coming home to roost,"  the sudden death of most people on earth would have its cheering section.
Posted by Moneyrunner at 8:29 PM