The whole point of socialism and communism is not to make humans equal but to make them unequal under the guise of making them equal.

Richard Fernandez remarks on the fact that what gets Conservatives condemned gets Liberals plaudits.


In the West, where socialists and communists are not openly in ascendance, and no formal nomenklatura exists, these droits du seigneur or “rights of the lord” are assigned through a process of what I’ll call “exculpatory cool”. Bill Clinton, for example, had lots and lots of exculpatory cool. He could seduce an intern in the White House and it would be “OK”.
However, if Mitt Romney or Newt Gingrich tried that stunt they’d be in jail. The press would demand it. They would faint in their presence, as feminists fainted in the Larry Summer’s presence.
Another example of the operation of cool is the unmasking of the underwear bomber’s identity (he was apparently working for the British). Since the President did it, it is “OK” — not just legally, which I can understand — but morally. If Scooter Libby does it, he goes to jail. Why? Because the President “gets it”.
This is also why climate warriors can fly to environmental conferences in private jets and why Al Gore can have a titanic mansion and yet remain “OK”. They have this cool factor applied to them.

And who determines what's cool and who's cool?  The press, the comedy shows, the weirdies of Hollywood.  We have let them get away with it because the own the printing presses and write the scripts and deliver the laugh lines.  And instead of telling them to shut the fuck up in a very loud voice, we sit still for it.  Well, no more.  Be Breitbart. 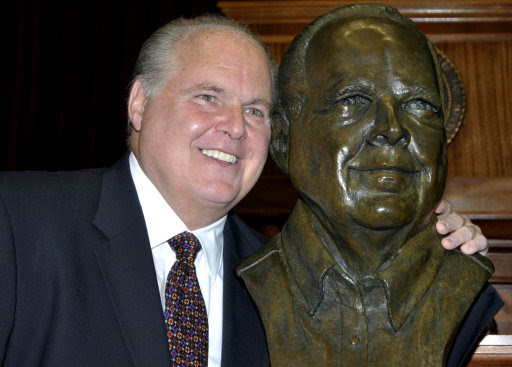 Rush Limbaugh  was inducted into the Hall of Famous Missourians and it was done in a closed ceremony because the Left has learned the art of violent protest and knows that screaming at the top of your voice intimidates the opposition.  We should not stand for this, and Rush should not have stood for it.
Posted by Moneyrunner at 9:17 PM